A chalice, or also known as a goblet, is a footed cup intended to hold a drink. In religious practice, a chalice is usually used for drinking during a ceremony or may carry a certain symbolic (religious) meaning.

The chalice has a general symbolic meaning as a vessel of plenty. However, the majority of chalice symbolism in the West and tattoo imagery is derived from Christian themes. In one example, it represents the Holy Grail, which is the famous cap which was either used by Christ at the first Eucharist during the Passover celebration just before to his crucifixion or in some versions, it was also the vessel which was used to gather blood from the lance that he received on the cross. 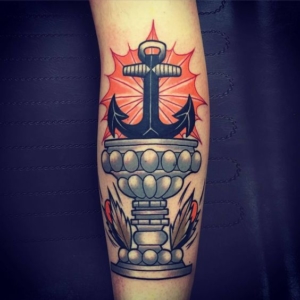 As the Holy Grace, it is a symbol of a higher purpose and sacred quest or journey in search of it. In the combination of a more widespread symbolism of plenty and the Holy Grail legends, drinking from this “cup” is said to grant immortality. In the second example, Christian imagery also uses the chalice in order to symbolize the Eucharist as it is known today in ritual, with the eating of bread and drinking of wine. In this sense, the chalice is still associated with the blood of Christ, but regarding redemption from sin.

Eucharist is a sacrament of initiation that Christians celebrate to commemorate what occurred at the time of the last supper. As we already mentioned, bread and wine are consumed, which are the symbols of the body and the blood of Jesus Christ. The bread and wine become the means by which the believer maintains a real communion with Jesus Christ in his death.

Ornate and bold chalice tattoos make for some solid ink and an eye-catching piece. Being part of the traditional sleeve or by itself, the chalice tattoo is a creative and somewhat unique tattoo, which is not the everyday.