Home
Tattoo Meanings
Chollo Or Pachuco, A Young Man With Hispanic Origins In The Tattoo Art.

In prison culture, tattoos are very much divided into ethnic styles. The Chollo or also known as pachuco that is a young Mexican-American man that typically wears a wide-bream hat, and a zoot suit is a tattoo design that is used by Hispanic convicts and members of a gang to signify membership. The pachuco is portrayed in full figure or simply as a face, with the hat being pulled down and a drooping mustache.

Pachuco refers to a subculture of Chicanos and Mexican-Americans who are connected with zoot, suits, street gangs, as well as nightlife and with flamboyant public behavior too. The idea of the pachuco, who is a zoot-suited, and nice-dressed, as well as the street-connected flamboyant playboy of Hispanic or Latino heritage – originated in El Paso, Texas and Ciudad Juarez, Mexico, had moved north, later following the line of migration of the Mexican railroad workers into Los Angeles, where it developed further.

A Pachuca is a female counterpart that is usually idealized as an attractive Chicana woman in a wonderful evening dress or a female version of the zoot suit, out with a pachuco boyfriend for a night of the town. They broke taboos with wearing men’s pants sometimes and appearing in public usually with their pachuco boyfriends; at that time, a good woman had their place in the home. American women were not encouraged to wear pants, because it was considered as strictly masculine. As a result of this, outsiders saw pachucos as rebellious, tacky, and un-American. 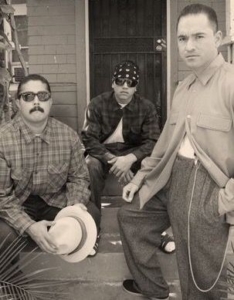 This also created a larger gap between Mexican-Americans and the rest of the community. But, this was not the intention of the pachuco style. Pachuca’s strove to prove that their community fits into the American culture and that they were not of lesser value socially or economically. To portray this, they designed their suits with luxurious, as well as expensive fabrics. Pachuca also made their clothes and also created a space for self-expression through fashion. They also defined male or female stereotypes, as well as roles in Mexican-American culture, in much the same way flappers had in European-American culture in the 1920s.

The origin of the term pachuco is still not certain, but there is one theory that connects it to the city of El Paso, Texas, which at that time was referred to as Chuco Town or El Chuco. People that are migrating to El Paso would say, in Spanish, that they were going ‘pa’ El Chuco.’ These migrants also became known as pachucos.

The name is probably derived from the name of the city of Pachuca, Hidalgo, Mexico. For a long time, there were migrants from Hidalgo State who lived in Texas.

Another theory also says that the word comes from pocho, which is a derogatory term for a Mexican born in the USA who has lost touch with the Mexican culture. The word is said to mean ‘punk’ or ‘troublemaker.’ Yet, there is another theory which considers that the term has an indigenous origin.

The pachuco style has been a dominating trend among Mexican-American youth in the 1930s-40s. Pachucos also became known for their distinguished look, dialogue, as well as actions. Pachucos dressed in recognizable zoot suits and usually styled their hair into ducktails. Some things, like decorative chains and tattoos, were also sometimes part of the pachuco look.

During the 1930s and 40, Chollas and Chicanos were known as pachucos, and they were connected with the zoot suit and hepcat subcultures. The press during that time accused the Chollos in the US of gang membership and petty criminality, leading to the Zoot Suit Riots. Until the 1970s, the typical Chollo and Chicano hairstyle was a variant of the pompadour that was piled high on the head and kept in place with some large quantities of wet-look gel.

In this century, a Chollo is stereotypically male, depicted as wearing fitting khaki pants or shorts, with white knee-high socks, creased jeans, white tank top undershirt, as well as button-front shirts. In the 1900s and 2000s, Chollos frequently have their hair buzzed very short, even though some continue to have the more traditional and slicked-back hair.

This can also be connected with black ink tattoos, commonly integrating calligraphy and art. A Chollo might also stereotypically own a lowrider. Another staple of Chollo fashion is long hair tied into braids.

Despite that Chollo refers to a male of Hispanic descent, it can also mean he is a member of a gang, or something broader than that. However, it does not mean that he is a horrible murderer, rapist, or something else. It has a cultural heritage, Hispanic pride, as well as regional pride connotations. Also, it is utilized for the idea of a real man, just like a woman refers to her boyfriend as Chollo, it can imply that he is a real man and he takes care of her and so on. Within the same group, the female counterpart would be called Cholla.