A Chicano is a person, usually a man or boy, who comes from Mexico. Just like with the majority of cultures, Mexican people are very proud when it comes to where they are from and their culture. Their pride is that big that they decided to bring it with them to the United States. The Mexican culture has a huge impact on the United States, and that is the reason why lots of people that live there can’t tell the difference of what Mexican culture is or not since it is just a part of life now. The extreme pride is why Chicanos get many tattoos that represent them, their family, and where they are from. Each Chicano tattoo can be different and unique, and much of it depends on the experiences of the person getting the tattoo. There is a lot of history behind this style of tattooing and a lot of meaning as well.

The term Chicano or Chicana is created to classify a group of people with a Mexican origin but live in the United States. However, this term was not used with positive connotations until the Chicano movement. According to history, before World War II, the Chicanos were discriminated against. Even though that was the case, there was an overall acceptance, for the most part, when the men of the Chicano society fought side by side, next to Caucasian men in the war. However, the expensive lives in the big cities were the reason why Mexican people moved into the suburbs and started their communities better known as the “barrios.” That was the beginning of a brand new style in the Mexican community. The youth of the area formed their style wearing things like disk caps and plumes, large clothes, and big chains, all to reflect their economic status. 1960 was the year when the Chicano fought back against oppression thorough the art of covering the walls with giant murals that reflected the way they felt at the time. These murals included lots of ideas that are still used in Chicano tattoos today.

The first appearance of the Chicano originates from the Pachuco gang in the 1940s, and these tattoos were widespread in New Mexico, Texas, and California. Initially, these tattoos were inked by hand and usually with a sewing needle of some sort. The most classic themes that were used in these designs were skulls, religious figures, women, flowers, and all kinds of text naming family members or people they have lost.

If you are interested in getting a Chicano tattoo than you should probably research all the possible ideas for this style as well as their meaning and find the one that best fits your taste, below are some possible designs made in this style.

Naturally, lots of people with Mexican origin decide to get a Chicano tattoo with religious symbols. This comes from the fact that 83% 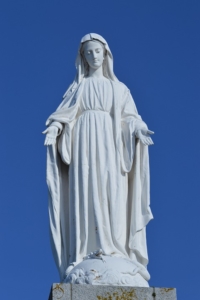 of the total Mexican population is Catholic. According to this, we conclude that religion had been passed down generations. As a result, you get many Chicano tattoos of Jesus, the Virgin Mary, and crosses amongst other religious symbols. Other religious symbols like the sacred heart are also typically chosen in this style, all done in black and grey.

The face of the clown, no matter whether it’s the jester or the smile now, cries later face, has long been a subject for Chicano tattooing. The clown in a Chicano tattoo stands for the idea of not showing weakness. Smile now and cry later is a mind-set that had been taken on when times were rough in the neighborhood. For the Chicano people, the clown was also considered as a symbol of playing games or potentially gambling with your life.

The Bandida, are the women tattooed on a Chicano’s body that plays an important role in the Chicano culture. American icons such as Marilyn Monroe or general Mexican women are frequently chosen due to their beauty. Very often, these women are chosen as a subject of gang tattoos. Sometimes, the Bandida tattoo is combined with dollars, skulls, and guns to represent the frailty of life.

The Chicano tattoos are famous for their elegant letters that are used to convey whatever message they are trying to portray.  Most of the time, these fonts are tattooed in memorial or a family member or friend, and they might be coupled with a portrait as well.

Just like with any other tattoo, when it comes to Chicano tattoos, the choice of design and the meaning that is attached to it is very important, because this tattoo is going to stay with you for the rest of your life and you want to make sure that you will never regret getting this tattoo at the first place.