Tattoos were part of the culture of human beings for a long time – for thousands of years – with tattooed human remains being found dating back to 3000 BCE. Nowadays, tattoos are considered as body art, and they are also largely spread, with a more substantial portion in younger people, and slightly more in women.

For centuries, people were marking their skin, deliberately and permanently applying different types of pigment and ink. As we already mentioned, tattooing is a practice in many cultures, in each of them, for different reasons.

Sometimes, body art can be a proof of social status, or they are also given as a rite of passage, or also to ward off evil, or to even identify membership in a group.

All art practice has some underlying ideology, and this is particularly true for tattoo art. Skin creations represent fundamental beliefs to the individual wearer or group. Tattooing is practiced by cultures from the west and east, too, by both men and women, and by almost all ages.

The attraction for the tattoo body art is quite obvious: Decorating one’s body with permanent art is a powerful statement, which cannot be easily erased or altered, so the act itself is almost intriguing as the image might also be.

With this brief introduction to tattoo art, we are also going to present you five tattoos, which may seem uncommon, but which are commonly chosen by tattoo lovers, each of them representing something different.

Playing on the darker side of the clown, as well as his dual role of fool and jester, the demented or evil clown substitutes a playful smile or a downturned mouth with a sinister grin. 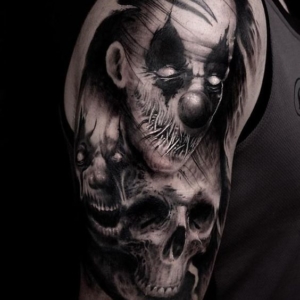 In works of fiction, the clown has usually changed from an entertaining character to an evil one, capitalizing on the unexpected and the reversal of roles to generate fear.

Tattoo art is probably using more of these types of clown and jester images than the standard clown, a type which is familiar with the circus. Even though the occasional clown trapping can be present, such as a strange hat, extreme makeup, a bulb nose, these clowns are alerted to make them more antisocial with a distorted face under the paint. Here, the image is not intended to convey some fun or play but rather something to be afraid of and maybe treated respectfully from a distance.

Unlike some other traditional tattoos of the early Pacific Northwest, the cod is not a mythical or powerful creature. To the Haida, who have inhabited this part of North America centuries before Europeans arrives, the cod was an important food, and it has been held in high respect.

To appease the supernatural being of the sea, as well as seek success in whale hunting, offerings of cod, together with some grease and tobacco, were created, with the hands held high, and the palms also turned out as in this tattoo design which was noted on the chest of a Haida chief.

A person may not think that some architectural tattoos are going to find their way into the tattoo imagery, but there is a very little number that does not. Indeed, some columns can be very different – the Egyptian columns with papyrus-leaf decorations at the top of the fluted Greek columns topped with some scrolling spirals.

Symbolically, the column does not simply support, but also a connection with ancient knowledge, and it is also not unlike and Axis Mundi, linking some different levels of a building of consciousness.

Also, keeping with the notion of support, it will not be unusual to see columns tattooed on legs and even arms, where the long expanse of available is ideal for placement.

The masks of comedy and tragedy are symbolic of the theatrical arts. They are derived from the unique and important role which they played in ancient Greek drama, giving the actors the ability to switch from one character to another very easily, with the simple change of a mask.

In a prison tattoo, a laughing face, and also a crying one, is utilized to symbolize the notion of play now, pay later.

Throughout the records of history, comets captured the imagination and attention of a lot of people. They appear unexpectedly and are unlike any other sky phenomena, disappearing mysteriously. The appearance of the Halley’s Comet shortly before the Battle of Hastings in 1066 ended up being a good omen for William the Conqueror.

Augustus Caesar utilized the appearance of a comet to claim that it was the soul of his adopted father, Julius Caesar being taken into the heavens and that both of them were, hence, godly.

Nowadays, comets are seen much less mysteriously, but their symbolism hearkens back to earlier times. They are utilized in order to represent the exceptional, as well as brilliant, or something especially insightful or unusual too. Together with a number of astronomical bodies represented in tattoo art, comets lend themselves to vivid and colorful treatments.

Although strange and uncommon, these five body art designs which we represented you above are quite interesting and attractive to the human eye.