Throughout history, the Cobra, as well as some other serpents, have played the main role in the symbolism and mythology of many cultures. Their forms, as well as images, are common in sacred art; some statues are also employed to watch over gardens, as well as households, and are worshiped in some shrines. When seeing the depiction of cobras, you should determine the context of the image to interpret its meaning. 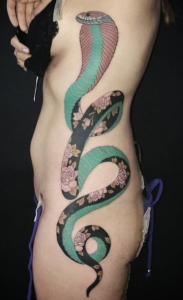 Cobra is any of the different species of highly venomous snakes, most of which expand the neck ribs to form a hood. While the hood is quite characteristic, not all of them are closely related.

Cobras can be found from southern Africa through southern Asia to islands of Southeast Asia. Throughout their range, there are different species which are favorite ones among the snake charmers, who frighten them into assuming their posture for defense. This snake sways in response to the movement and maybe also to the music of the charmers, who knows how to avoid the relatively slow strike and who may also have removed the fangs of the snake.

The venom of cobras generally contains neurotoxins that act against the nervous system of the prey – primarily small vertebrates, as well as some other snakes. Depending on the amount of the venom that is injected, the bites, especially from some larger species, can be fatal. Thousands of deaths happen annually in South and Southeast Asia.

The largest venomous snake in the world is the king cobra or hamadryad. It can be found in forests from India throughout Southeast Asia to the Philippines and Indonesia. Its length is 5.6 meters or 18 feet.

The symbolism of this snake is essentially the snake symbolism, with almost all of the same associations and connections. This is especially identifiable species as of its inflatable neck hood.

The Egyptian and Indian cobras are usually the types of snakes that are displayed by snake charmers. The cobras seem to respond to the music that is played by the charmer, but just like any other snake, they are deaf, and they simply follow the movements.

However, all cobras are quite venomous, and the king cobra is, as we already mentioned, the largest one of them all.

The most famous use of the symbolism of Cobra is that of the royal Egyptian uraeus, worn at the forehead of the pharaoh to represent sovereignty, life, knowledge, as well as youth. A cobra was also frequently seen paired with a vulture, which is the symbol of Upper Egypt. Together, both these represent the unification of the lands. Cobras have been utilized in connection with the afterlife in Egypt too. Probably because of their protective natures, two cobras that are spitting flames were said to guard the gates of the underworld.

On the other hand, in India, both Hindus and Buddhists have some special reverence for the Cobra. Hindus believed in the immortality of the snake because of the shedding of its skin, and a snake eating its tail in Hindu was a symbol of eternity. Though they are worshiped during the entire year, the Nag-Panchami festival day is filled with Cobra worshiping and attendees performing some religious rites to seek the protection, as well as the goodwill of the Cobra.

Buddhists relate the story of how the Cobra has shielded the sleeping Buddha from the sun, as well as rain as he was sleeping.

The cobra tattoos are glorious vessels of masculine flair. These coiling snakes enshrine envious layers of venom and virtue.

In order to encapsulate deadly flair, there is nothing more impacting that the lethal nature of the cobra tattoo.

Depending on the cultural reference, snake tattoos, in general, can symbolize a variety of characteristics and meanings, such as:

Cobras are scaly beasts, and they can be tattooed on your limb for a daring 3D effect. There are some cobras from which you can select, but the most notorious incarnation is the king cobra. It is a supremely poisonous monster that contains endless depths of fiery poise, particularly with its intimidating camouflage patterns. The spectacled Cobra is similarly commanding and righteous.

Cobras can also appear prominently in the mythology of India. Additionally, to being portrayed with snake charmers, these revered creatures are most commonly shown alongside a few Hindu gods. Vishnu, as well as Shiva, is closely tied to this animal, and the legendary six-headed version of the Cobra is known as Shesha in Sanskrit.

In the end, your cobra-tattoo is going to enshrine a mysteriously menacing presence with infinite connotations that are personalized to the individual.