Insects and insect tattoos may create a feeling of disgust, but for some tattoo fans and lovers, insects are the perfect theme. Insects, like cricket, may make for awesome tattoo designs, which are going to fascinate you with fantastic detail or adjusted colors. 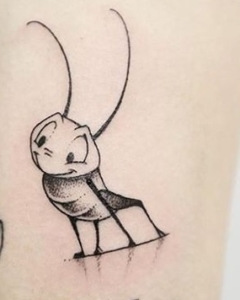 Insects are beautiful creatures, and they deserve our appreciation, as they are an integral part of our environmental system. They have great significance for the ecological balance on the planet Earth. They also help for the formation of the top layers of the soil, pollinate blossoms and even serve as plant pest controllers. Moreover, they are a crucial element in the food chain, being food for reptiles, as well as other animals too.

When it comes to tattoo art, insects are transformed into artistic illustrations. If you love insects, you will definitely like tattoo designs of insects. Today, we are going to talk about the meaning and symbolism of one particular insect, the cricket.

For such a small creature, you will not think that its symbolic meaning is going to be a very big deal. But it is a big deal.

Crickets play a significant role in superstition and myths, both around the Mediterranean and in the Far East, and they are also equipped with good intelligence and fortune. In China, these insects were bred especially for their singing or also called chirping and were also sometimes kept in little golden cages. Additionally to this, cricket fighting was a sport in China, so they also became the symbol of fighting spirit.

Crickets are the symbol of luck, patience, protection, and contemplation. The cheerful, chirpy song is a beautiful message of attracting what we want. The song of crickets is the sign of being more sensitive.

Some of the symbolic meanings of crickets are the following:

You will probably ask yourself what does protection has to do with the symbolic meaning of these insects. Well, that comes from the Eastern culture. Both crickets and grasshoppers are the symbol of protection in China. According to history, crickets altered Chinese households to threats.

Just like the ladybug or the dragonfly, cricket symbolism is a sign of exceptional luck too. Moreover, it means that all of the things which you were working toward and dreaming about are possible. Hence, cricket meaning directs you to stay open to guidance, as well as message, so that you are going to know what you need to do.

The crickets and the grasshoppers belong to the group of Orthoptera. Despite having some physical differences, they are almost interchangeable regarding animal symbolism.

Almost in every culture, it is said that seeing a cricket at your home or office, symbolizes good fortune. Because of this, you should never hurt this tiny insect. Doing this will give you the opposite, and that is bad luck. When the cricket hops into your life, happiness and joy are soon going to come.

Crickets have long antennas that hone in on their environment. Because of this, they also symbolize sensitivity and intuitiveness. Moreover, they can also represent our higher senses – those that connect us with Angels and the Divine.

As we already mentioned, insect tattoos are usually chosen by those people who are insect lovers, and also love animals in general, or love nature and everything wonderful that is hidden in it. Usually, those people are sensitive, vocal, and insightful.

In some legends, crickets appear as brave, as well as spirited creatures that have the ability to overcome anything even though they are small insects. As with a lot of other cultures, the Southern tribes see this tiny insect as the symbol of luck and good fortune. So, these are several other reasons why people decide to have a cricket tattoo.

Some other meanings that cricket tattoos can have are consistency, morals, self-expression, communication, and a lot more.

Because of their size, crickets make for wonderful tattoo designs. Sometimes, tattoo lovers choose the small insect on its own. Still, sometimes, they combine it with another image from nature, with an object, or even with other animals which have similar symbolism or meaning, or which are opposite, in order to express some contrast between some things in their lives.

Bugs – whether we love them or hate them, insects are all extremely symbolic and can carry huge importance with them. As tattoo designs or even animal totems, insects have a lot of things to teach us when it comes to teamwork, productivity, communication, and a lot more. So, you should think twice before you get an insect tattoo but believe us, you rarely ever regret doing that.