Tattoo artists all over the world are on the constant lookout for new tattoo designs that they can use in their body art form. They consider the aesthetic appeal and also the symbolic value while they make use of a specific design element in their creative designs. The dragonfly art made a place of popularity among women since the nineties, as this has been the period of liberalism, as well as gender equality. However, they are a popular tattoo design among men too, as their popularity is no longer confined only to women; more and more men are desirous of having this tattoo design tattooed on their bodies.

There are a lot of things, objects, or elements that can be represented in tattoo art, such as animals, nature, celestial bodies, art, religious themes, marine time and military themes, prison or gang themes, and even insects.

Tine insects may be utilized as a theme or motif for beautiful and amazing body art, out of which the dragonfly tattoos are one of the most alluring design options nowadays. These vibrant insects exude elegance, as well as charm, and there is something mystical about them, which makes them an excellent choice for discerning tattoo lovers. 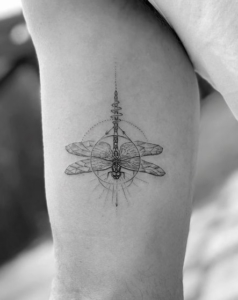 The dragonfly, with its delicate, fine line depictions and gossamer-thin but still opalescent wings and body, is a frequent insect subject in tattoo art, and it often symbolizes swift activity, according to some Native American groups.

The dragonflies were associated with the metaphysical for a long time, and they usually represent transformation as these tiny insects start their lives in the water and then transform into winged creatures as adults. The water usually represents the subconscious, while the air represents freedom. Their iridescent colors can symbolize the number of facets of personality and spiritual growth.

Just like all other tattoo designs, the symbolic significance of the dragonfly tattoo also needs proper understanding before having it inked, as a tattoo is something which demands a lot of time, patience, and also money. It is going to be with the bearer for his or her whole life.

When talking about its meaning, one has to take a close look towards its life cycle, which begins in water as a female lays the eggs there in great numbers. After that, the eggs hatch, and the insects start their life cycle in the water, which relates it to fertility. Moreover, the insect is also connected closely to the butterfly, which is another flying creature regarded for its beauty, as well as bright colors. Different cultures all over the world see the dragonfly in different light symbolically, and we mentioned the Japanese and Chinese.

In the Native American culture and art, the dragonflies occupy an important place, as they are seen as the symbol of swiftness, as well as happiness in some of the tribes of the culture. They are also seen as a protective talisman in some tribes, and it is said that they oversee all of the members of one tribe. They can even signify facing hardships or overcoming losses with courage and strength.

In European culture, the reputation of the insect is not such a positive one, as it is connected with evil and also the devil in a lot of European nations.

In the New Age Movement, the dragonfly tattoos are seen as a symbol of agility and speed, which is a characteristic attribute of this small little insect. It is also used to represent spiritual awakening and growth. Some even think that a dragonfly that lights on a person is a sign that a deceased loved one is visiting. Moreover, they stand for freedom and good luck.

As we already mentioned, the meaning of the dragonfly tattoo can vary across cultures, and it depends on the meaning that the dragonfly has to the wearer. Still, there are some common meanings which are applied to this type of tattoo: Some of them are:

However, there are a lot more meanings associated with this specific tattoo design.

The message which a dragonfly tattoo conveys is as personal as the wearer. Even though they typically represent transformation, mystical ideas, or spiritual growth, they are also attractive designs that can be worn for their ornamental value only. These designs are typically classy and maybe even more acceptable in social circles, which frown upon more serious body art.

If you are a wearer of a dragonfly tattoo, you are probably a free spirit or one that thinks deeply about life and the world around you. You may also be seeking enlightenment or expressing your deep connection to the Universe. The meaning that your dragonfly tattoo will have is going to be epic and will have a psychic enhancing element to it with being able to see farther in the mind’s eye.

These tattoos are fun, as well as attractive and socially acceptable in almost any setting. And the most important thing is that they seek spiritual growth or embrace the concept of living in the moment. Dragonfly tattoos are the best way to express this.