Insects are beautiful creatures. They deserve the appreciation of people because they are a fundamental part of our environmental system. They have enormous importance for the ecological balance on the planet Earth. They help for the formation of the top layers of the soil, pollinate blossoms and serve as plant pest controllers. Furthermore, they are a crucial element in the food chain, as they are the food for reptiles and other animals. When talking about tattoo art, insects can transform into artistic illustrations. If you love insects, you will definitely love insect tattoo designs too.

Although insects and insect tattoos may create a feeling of disgust, for some tattoo lovers, they are the perfect theme. In fact, they may make for amazing tattoo designs, which will fascinate you with amazing detail or adjusted colors.

The insect we will talk about in this article is the famous and fantastic ladybug, its characteristics, and its use in tattoos.

Ladybugs, ladybird, or even lady beetles, are a family of more than 5,000 species. They display some variation in function and form, but almost all of them are small, voracious eaters. Actually, their capacity to devour many plant-eating insects is what makes them the best friends of farmers.

Ladybugs are somewhere between 0.3 and 0.4 inches in length. While they are born black, their adult coloring can range from yellow to scarlet. The spots present on their half-sphere shaped wing covering vary too. 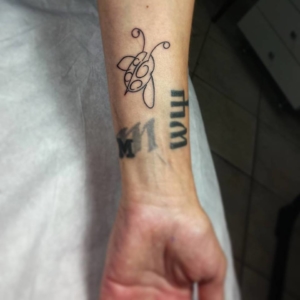 Their coloring is quite memorable for the predators; in that way, they use it as a defense mechanism.

In their life cycles, there are four stages – a process that is professionally called complete metamorphosis. Because they feed themselves on aphids and other plant-eating insects, when it comes to sexual mating, females deposit about 300 fertilized eggs among the particular plants. After two to five days, newly hatched larvae have a feeding source for the three weeks they remain in this stage.

After they bulk up on aphids, larvae enter a resting stage as pupae. After one week of this growth process, the adult ladybug emerges completely formed and prepared to continue eating. The lifespan of these beetles is between two and three years.

The origins of the ladybug are in Asia and Europe. However, because of its usefulness at controlling aphid populations, it later became present in Britain, North American, and Ireland.

We can find them almost everywhere, aphids, and temperate conditions are. This includes some small plants, trees, gardens, and shrubs. As they don’t fare well during the cold period, they over-winter in protected areas like caves, dense foliage, and boulders.

During the Middle Ages, people associated ladybugs with the Virgin Mary, because of their good works in ridding plants of pests. This is where the word “lady” comes from in their name.

It is actually more than likely that ladybug tattoos are not representative of religious beliefs. This is because many tattoo images relate much more directly to Mary. Instead, the ladybug sometimes appears as part of garden scenes, or among some other colorful insects.

It isn’t unusual to see this tattoo in isolation, too, simply because of its symmetric, brightly colored, and button-like body. One of the most common references connected with the ladybug is good luck. If the ladybug lands on you, you should expect some type of good luck in your life.

Having a tattoo of this insect on your body will ensure that you travel with good luck too. The ladybug is also the symbol of love, friendship, and happiness. For example, two people getting similar ladybug tattoos represent the deep connection, regardless of how far they are apart.

We know that the ladybug is an efficient killer and will do anything to keep your garden free of pests. That’s why the tattoo of a ladybug may represent protection from the evils in this world.  Another thing that the ladybug tattoo symbolizes is good deeds.

Various cultures in the world have unique symbolic meanings for the ladybug. In the Christian culture, for example, it finds its association with the Virgin Mary. Just like we already said, this unique connection comes from the fact that it fiercely protects the plants.

The ladybug will protect plants and flowers from the destructive effects of insects, permitting their natural beauty to live on.

In ancient Chinese cultures, this insect is auspicious. They considered it the symbol of good luck, just like the four-leaf clover tattoo design. The ancient lore says that when a ladybug lands on you, you can expect your true love in your life. By counting the spots on it, you can tell how many months will pass before your love appears.

People often get creative when getting tattoos. However, the true beauty of the ladybug is always on display with its bright colors and spots. Although many people get a simple ladybug tattoo, there are several variations that are also present. Some of them are flying ladybug, ladybug heart tattoo, realism ladybug tattoo, etc.