Divergent tattoos are designs that are created as a replica of those tattoos shown in the popular Divergent movie series. Each of these tattoos has a different size and a unique look to it. Even though it seems impossible, there are quite a few meanings that can be attached to Divergent tattoos, some even quite powerful.

It’s no surprise that a lot of people are interested in getting these tattoos because the Divergent series was and still is relatively popular. However, just like with most tattoos that were created in fictional series, it’s essential to know precisely what each one symbolizes before you decide to get one. The reason for that is because you want to make sure that the tattoo will always be relevant to you, so you don’t have to get it covered up later on.

The most important reason why people decide to get their Divergent tattoos is that they are big fans of the Divergent book and movie series. Most often, the tattoo simply represents a person’s love for the series instead of anything specific about it. One thing that is great about most of these tattoos is the fact that they have meanings that a lot of people look for in tattoos, so basically they get a two-for-one deal.

Tris is the lead character in the stories, and her raven’s tattoo is the most usually seen Divergent tattoo for several reasons. She has this tattoo inked on the collarbone, and the birds are flying down from the shoulder towards the chest. The ravens serve as a symbol to honor one’s loved ones. In the books, Tris is especially honoring her three family members. This could be an excellent tattoo for any person that wants to express their love for their families. 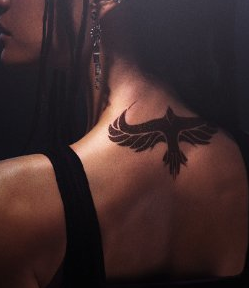 Tobias, who is the love interest of Tris in the show, owns a tattoo that is also commonly chosen by the fans of the stories. His tattoo includes five faction symbols that are placed down the middle of his back along with other markings. This is probably the largest Divergent tattoo that you can get, but it also has some very significant meanings attached to it. The symbols in his tattoo represent sincerity, unselfishness, intelligence, bravery, and peace. The tattoo as a whole serves to demonstrate Tobias’ leadership, though he was secret with Divergent.

Other Divergent Tattoo Designs And Meanings

Another tattoo that is less popular as a Divergent tattoo is a black and grey hawk that Tori has tattooed on her back and neck in the series. This tattoo has a very striking look, because of the hawk’s wings fully open and shiny red eyes watching out at anyone that sees it. The hawk represents protection from everything that the owner fears. Tori is an important character in the series and is a good friend to Tris, but most people do often decide to get the more well-known characters’ tattoos.

People who want a tattoo that is going to stand for the whole faction will often decide to get the faction symbol(s) that they like the most. This would be a perfect idea if you were interested in representing characteristic symbolism that you want to accept and, rather than getting the whole Tobias tattoo. As an alternative, you can get the Divergent symbols that are most meaningful to you.

Choosing a place to get your Divergent tattoo inked is very easy because most often, people decide to get them created and placed precisely how the characters have them in the films. Moreover, people decide to stick with the original black ink, though some do add in a bit of color to modify them.

Although people tend to get the same Divergent tattoo designs that they saw in the movies, you are free to choose something a bit different. For instance, Tori’s hawk can be customized to look the way that you want it to look, perhaps slightly larger or with a diverse look to the wings. You must think about the meanings that you are going to attach to get inspiration for the design if you decide not to get the original.

You are also free to have the same tattoo designs as in the show but to have it inked in a different place. For instance, you could decide to have the hawk inked on your arm or even your chest instead of putting it on your back. If you choose to get a larger version than the original, you might be obligated to choose a different place to put it on your skin.

If you consider yourself as a fan of the Divergent books and/or movies because it had touched you in a powerful way or can truly relate to one of the characters included, then you are a perfect candidate for a Divergent tattoo. Most often, these tattoos are very simple for making, yet they do have a very striking look to them. They have a very modern all-black-ink look, while at the same time, they have a classic tribal look.