We have already talked about many birds and their symbolic meanings in tattoos. One such bird is the raven. The raven is actually a dark and elegant bird that translates nicely into a tattoo with great meaning and symbolism. Just like most animal designs, the raven is often profoundly symbolic to the wearer. You can design your raven tattoo in various ways in order to convey your personal meaning and connect it with your personality. 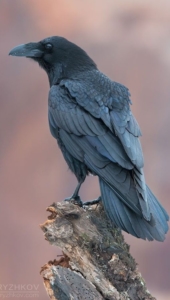 In the article of today, we are going to discuss these tattoo designs and their symbolic meanings in the tattoo world. We hope that you will have the ability to find many inspiring meanings and ideas for your next tattoo design.

The raven is definitely one of the several larger-bodies species of the genus Corvus. These species don’t form a single taxonomic group within the genus. Also, there isn’t a consistent distinction between “ravens” and “crows.” These appellations were assigned to different species basically on the basis of their size. The crows are generally smaller than the ravens. The largest raven species are also the common raven and the thick-billed raven.

For a long time, ravens were associated with dark omens and death. However, the real bird is somewhat of a mystery. Unlike its smaller cousin, the crow, not a lot was written about this unique bird. There are a lot of fascinating facts related to it and its characteristics.

When talking about intelligence, these birds rate up there with dolphins and chimpanzees. For instance, in the wild, ravens have pushed rocks on people in order to keep them from climbing to their nests. Also, they have even stolen fish by pulling the line of fishermen out of ice holes. They even played dead beside a beaver carcass in order to scare other ravens away from a delicious feast.

In captivity, these birds can learn to talk better than some parrots. They even mimic other noises such as car engines, animal and birdcalls, toilets flushing, etc. Ravens can also imitate wolves or foxes in order to attract them to carcasses which the raven is not able of breaking open. When wolves are done eating, ravens get the leftovers.

A lot of ancient cultures believed that this magical bird carries powerful secrets. For instance, in some mythologies, the raven is believed to be a creature that cannot keep a secret. This bird is also the first bird ever mentioned in the Bible. In the story of Cain and Abel in the Quran, it is a raven that teaches Cain how to bury his brother.

The raven even finds its association with the Celtic culture. This is one of the reasons why there are raven tattoos in Celtic art. The Celts were no strangers to war and they saw ravens eating the dead on the battlefield. For them, the raven was the symbol of death and war. Moreover, Celtic raven tattoos also represent magic, prophecy, and protection.

Native Americans also believed that this bird brought light to the earth. They considered it the symbol of balance and of the dance between bad and good. In Roman and Greek mythology, the raven finds its association with Athena and Apollo.

Even though ravens typically find their use in tattoos as omens of ill will or symbols of the dark side of the psyche, they have not always had this type of association. In China and Japan, for instance, the raven symbolizes family affection.

In the Book of Genesis, this bird is the symbol of clear-sightedness. However, it is a bird of prey and in this respect was affiliated with the gods as their messenger. This was especially true in terms of bringing death or in conveying souls.

There are a lot of meanings of the raven that may be applied to your tattoo. Raven tattoos may hold both negative and positive meanings. This tattoo design was the symbol of darkness, mystery, death, and negativity for a long time. A lot of people think of death when they think about this bird. This is probably because of the strong negative symbolism which was connected to this bird over all these years. However, there are a lot of positive symbolic meanings that can be associated with the raven.

Some of the most common associations and symbolic meanings with ravens are:

In the end, your tattoo will symbolize what you want it too. Nobody can actually tell you differently. These tattoos can also symbolize future, light, inner self, misery, pain, thought, etc. There are a lot of meanings associated with this bird, so you can choose from them or add your own meaning too. It all depends on you and your personality.