Nowadays, many people worldwide decide to get a tattoo and, within it, to incorporate some symbols. Such symbol deems fitting to their character, personality traits, and has a meaning within their life. Or, they merely choose something which will represent a specific time of their life – no matter if it is the past, present, or the future. Human beings always had a special connection to birds. The bird is a  symbol for a lot of human values. There are even some inventions, such as the airplane, which are based on their body structure. 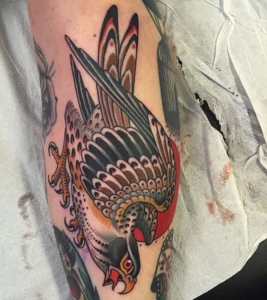 They also represent a variety of human traits that we aspire to achieve, as well as incorporate into our daily lives. Although the characteristics of each bird are different, they all speak about one symbolic meaning – the desire to be free.

Just like in mythology and symbolism, birds also have their place in tattoo art. Most of the associations of birds are positive. Some of the most common meanings that bird tattoos have are nobility, freedom, beauty and elegance, peace, protection, etc.

One bird that has a special place in tattoo art is the hawk.

Just like the eagle, the hawk is a bird of honor and courage. It is also the bird of prey and the favorite one in tattoo imagery and symbolism in general. It soars high in the skies as the representative of sun deities, and the symbol of passion, energy, and power.

Hawks are formidable hunters, thanks to the keep eyesight, as well as impressive depth perception. For these reasons, the birds became one of the companions of choice for skilled hunters. Also, they were humanity’s old hunting partners. The ancient sport of falconry is still a favorite sport for noble statesmen, and the hawk is the emblem of status, nobility, and luxury.

In several traditions around the world, the hawk is the guardian of the souls of the dead. They have their close association with deities like Horus and Charon. In Native American society, the hawk is the embodiment of the souls of long-gone ancestors. American tribes give them honorary places in the tribe. Most importantly, the hawk has a fighting spirit. Native American warriors believed that appeasing the hawk’s spirit would make the ancestors happy. In return, warriors are blessed with some skills which would make them better fighters. In this vein, the hawks symbolized war.

The images of birds are popular among tattoo lovers. The birds always have an association with the sky, freedom, and flight. The most famous representatives of birds in tattoo art are the eagle, the hawk, the raven, the falcon, and the sparrow.

The hawk is the source of the nature of the famous Egyptian symbol of the Eye of Horus. In Greek mythology, it was Apollo’s messenger. Frequently associated with the sun and sky, the hawk has its association with royalty too. Falconry, the sport of hunting with hawks, was a pastime of the privileged and wealthy for a long time. In tattoo art, it is not uncommon to represent the hawk on a leather glove or in the process of hunting.

Hawk tattoos are common among tattoo lovers, and some of their most common meanings are:

People believe that birds are emotional, just like humans, because of their wish to always be free. That is the reason for the special connection we have with birds. The hawk is a well-respected bird, because of its fighting spirit, making it a warrior symbol among Native Americans. That is why it is also a symbol of war. The hawk, as well as its spirit, has a special connection to great virtues. Getting a hawk tattoo will show the world that you are a noble and honorable person too. These tattoos are also a great way to show your strength and power. That is why a lot of artists depict the bird in flight, placing it on strong muscles such as biceps. That is to give a more dramatic look.

The hawk is also among the fastest hunters on the planet. It can rise hundreds of feet in the sky, see the prey down on the ground and utilize its sharp eyesight, catching the prey without the prey even noticing. This is the reason why a lot of women and men choose hawk as their tattoo image. The strength and power of this bird, together with its killer instincts, thrills them.

Nowadays, we can see that the hawk tattoos hold many of the same meanings which they held in the past. Today, a hawk tattoo can be a symbol of courage, honor, passion, nobility, and energy.

For other people, hawk tattoos represent intellect, cunning, and communication. Because of its connection with power and strength, people simply adore it.

With an open wingspan in flight, this could be the most beautiful and captivating of all tattoo concepts.