Sharks are some of the most fearsome creatures of the sea, also known as ‘kings of the sea.’ Sharks are a predator that is frightening and sometimes aggressive yet, at the same time, oddly fascinating and admiring animals to humans. Sharks are creatures that represent power and dominance and have haunted mankind’s nightmares since the days when we first conquered the wild seas. This is the very reason why Hollywood movies like Jaws and Deep Blue Sea and the newest among them Meg have become mega-blockbusters; we’re simply transfixed by this terrifying behemoth. But there’s so much more to these fearsome predators than meets the eye.

In the West, the sharks represent a symbol of terror and violence but, at the same time, power and fearlessness. Images of sharks are standing as badges of honor used by the sailors to show that they have no fear of death. Furthermore, in Hawaiian mythology, sharks are considered to be ancient gods and goddesses by taking part in a specific ritual; loved relatives could be transformed into powerful being upon their deaths. These ancestors are called ‘Aumakua,’ and the fact that they would continue to protect their descendants is the reason why the majority of native Hawaiians willingly throw food to Great Whites swimming around the shore. This tradition follows the legend of Kamohoali’i, the most popular Hawaiian shark god.

There are many indigenous cultures where sharks are seen as the spiritual bridge between the land and the sea. In Fiji, for example, the shark god Dakuwanga protects fishers at sea and devours lost souls. Starting from Australia to the Hawaiian Islands, native folklore speaks of shape-shifting sharks that freely roam everywhere.

Sharks are also considered as a symbol of an aggressive lust for life. This comes from the fact that when observed in their natural element, they are constantly in motion, even while they sleep. For many individuals, this represents their views of living life – go hard or go home. People with a shark persona are those who seize every day and go ‘full speed ahead’ when it comes to achieving their goals. They are passionate about their pursuits for happiness, and this is the particular trait that makes both sharks and people with shark personas the top predators of the shark tank of life. Those people who are described as having an affinity for business are thought to have shark personas, and even though they might be a mess from the inside, their appearance says that they are cold, calculating, and not completely consumed by their emotions and have an excellent poker face.

Meanings behind the shark tattoos:

These top predators of the sea are recognized through the several traits they possess, such as curiosity, fearlessness, intelligence, strength, aggression as well as clear vision and insight.

The type of elements you want to add to your shark tattoo design is a factor of your imagination. The majority of people depict sharks in a powerful predator position as if it is ready to fight and is on the hunt. The shark tattoos come in a variety of sizes and colors, the most popular being:

Great white sharks are the most popular and famous sharks in history. From the movie Jaws to the latest flick Meg, Great Whites are fodder for Hollywood blockbusters and active minds. Great White Sharks are considered the ultimate predators and represent the crucial characteristics and features that we have to expect from sharks. It is characterized as clever, aggressive, ruthlessly efficient predator, and unbelievably imposing, and due to that, many people who consider themselves as being at the top often decide to get a Great White Tattoo on their bodies.

The hammerhead shark in Hawaii is admired as a guardian. The Hawaiian legend states that these sharks protect swimmers and sailors from the vicious man-eater, the Great White Shark. Seeing a hammerhead predator in the water means that you have the protection of Gods, where those children who are born under the sign of the Hammerhead are considered as natural warriors. A Hammerhead Shark Tattoo is a perfect choice for people who possess a protective side and people who always guard the loved ones. 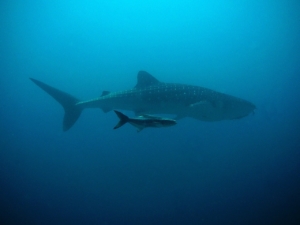 Tribal tattoos have become some of the most popular designs, and it’s not uncommon to see sharks done in this style, with details that can be associated with a particular culture. Every pattern carries a specific meaning closely related and guarded by the tribe’s elders and spiritual leaders. A Tribal Shark Tattoo represents a good way to connect with the spiritual power of the fearsome shark and identify with the autochthon culture of a region. This means that you have a strong bond with nature and the water element.

Besides the fact that sharks have a fearsome reputation, people who identify themselves with this terrifying creature also have a playful side. There is no person who doesn’t remember cartoon classics like Jabber jaw and Street Sharks that feature colorful, shark characters. Even though these designs speak to your joyful nature, people surrounding you should be aware that underneath your calm surface lies a deadly predator shark persona.