Birds are the embodiment of nature. They possess a lot of different qualities that we human beings aspire to have or portray to the world. The love of human beings for birds was on since time immemorial, and it is even more manifest today. It is not unusual to find someone that has a tattoo of some bird or design with a bird included on the arm, back, shoulder, neck, or even thigh. Each bird tattoo design symbolizes a lot of human values or traits too.

There are a lot of beautiful and noble birds all over the world. One such bird is the peacock. Peacocks are unique and loving birds. That is why people mostly associate them with nobility, beauty, wealth, 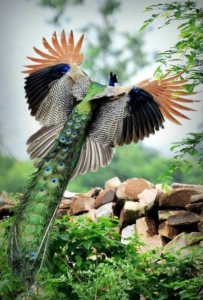 Peacocks have very bright and sunny characters, which are usually used to impersonate the Sun itself. Additionally, to this, the peacock also means longevity, diversity, immortality, glory, and love in the most romantic of its manifestations.

In this article, we will talk about peacock tattoos, their meanings and symbolism, and also about the characteristics of this unique bird. Read below and find out something more about peacocks and their way of life.

The two Asiatic species are the blue Indian Peafowl and the green Peafowl of Southeast Asia. The one African species is the so-called Congo peafowl, which is native just to the Congo Basin. Peacocks, the male Peafowl, are known for their piercing calls and extravagant plumage. The latter is quite prominent in the Asiatic species.

Peacocks are large and colorful pheasants, best-known for their iridescent tails. The tail feathers, or coverts, spread out in a distinctive train, which is quite more than 60% of the total body length of the bird. They boast colorful “eye” markings of blue, red, gold, and other hues.

As we already mentioned, peacocks are the males of the species called Peafowl. This species is native to Asian forests. They are some of the most widely recognized birds all over the world. This is because they have blue-green plumage, and their tail feathers fold open into a fan. However, there are more things about these birds than only their feathers. Not many people know much about them and how they live and interact.

One of the main reasons why peacocks unfold their tail feathers is to impress females, though most of their displays are ignored.

Even though nowadays we rush to associate peacocks with vanity, as the male of the species opens his upward-spreading and magnificent tail feathers to attract a mate, peacocks have a rich Eastern heritage in symbolism. In its native India, a lot of gods have been portrayed riding this sacred bird.

For instance, in China, this bird was the embodiment of dignity and beauty. For Muslims, on the other hand, together with other groups, this bird is a cosmic symbol whose spread tail represents the whole universe. Moreover, it represents the Full Moon or the Sun at its highest point.

Peacock tattoos are dominated by the metallic and brilliant blues and greens of its plumage, together with the distinctive and iridescent “eyespot” near the tip of the feathers, which is ranged with bronze and blue color.

One of the main reasons why the peacock tattoo is widely used is the numerous meanings connected with this animal. For many, the peacock represents the symbol of pride, showing off the big colorful feathers to mark territory and attract the opposite sex as well.

Tattoos of this stunningly beautiful creature may also represent some of the following things:

Those people who are into skin art also love the capacity to get entirely creative with the design and the meaning of peacock tattoos. This solar bird can have other symbolic meanings, such as life, glory, vitality, health, and radiance.

The unique combinations of colors of the peacock also permit the wearer to incorporate a lot of their favorite colors. They can do so to complement the representations which they closely connect in this tattoo.

The beauty of these tattoo designs does not rest only in the color of its plumage. Tribal tattoos that focus on intricate patterns bring out the beauty of this bird too. Peacock tattoos can come in many different styles, such as white peacock tattoos, and peacock feather tattoos.

Tattoos of peacock are more than only an emblem for self-absorbance and vanity. They are the beacon for loyalty, healing, compassion, and purity. Your design may be as creative and attractive as you want it to be. All that you will need is a little imagination and lots of pretty colors.