Some of the most popular subjects in almost all the cultures around the world are ghosts. During our childhoods, we have been hearings stories about them, and there are all kinds of movies made about them ghosts. In almost any of them, the ghost stands for something very spooky and scary that we don’t want to encounter or to deal with. However, ghosts are doesn’t necessarily have to be scary. If we considered them as just a spirit that hasn’t passed on to the afterlife, it helps us deal with that a bit easier, or we might look at is as a family member watching over us.

No matter what is your point of view when it comes to ghosts, they are a big part of our tradition and history. This is the reason why there are so many people that are interested in ghosts and movies that include them. Moreover, people even create shows where they go “ghost hunting.” People who are fascinated by this genre of culture are those who often choose to get a ghost tattoo.

According to tradition, a ghost is the spirit or soul of a dead being that appears to the living. Some describe them as phantoms, haunts, apparitions, shades, and poltergeists, to name a few. The descriptions of ghosts depend on the people. Ghosts are also recognized as undead creatures like demons or zombies. However, for the majority of people, ghosts are the translucent or invisible presence in a room. Most often, we are only able to feel them, but some people claim that they have seen them, and many stories and movies revolve around that.

There are different reasons why people have a fear of ghosts. The most basic one is the fact that a ghost is a person that has passed but is still present in the material world, taking the form of a ghost, and that is regarded as an unwanted and unnatural state of being. The fact that is unknown makes it even spookier since we are so used to knowing what is occurring in the world, and when something goes inexplicable, it makes us uncomfortable.

There are times in ancient cultures when the soul of a human is literally or symbolically shown as an animal or a bird. There is a common belief that the human soul is almost a literal replication of the person that passed even the clothes they were wearing. All over the world, there are ancient documents where you can see this in different artwork.

There a lot of meanings that can be attached to a ghost tattoo. Firstly, people decide to get ghost tattoos because they are major fans of stories and movies that include them. There is a whole subculture of horror fans and ghosts that are part of that.

The ghost tattoo also stands for the mysterious. A lot of people like to put themselves in uncomfortable situations in order to gain some sort of growth and ways to learn. The ghost tattoo is a symbol of the mysterious and only after we start to accept the fact that there are things in the world we will never be able to understand, it will make us that much stronger and wiser. These tattoos also serve as a reminder that we are not always in control of things. 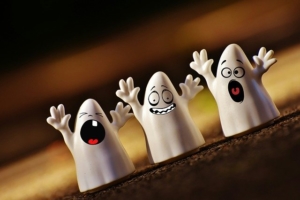 This is probably the most old fashioned ghost tattoo design. These designs represent the idea we had about ghosts when we were children. They very much look like Pac-Man ghosts, and we can say that the Pac-Man itself comes as a result of the idea from the old tales of spirits and ghosts. The design in this tattoo is portrayed with a sheet with two holes poked in it for the eyes. If you ask someone to draw you a ghost, you can be certain that this is precisely what they would come up with, and that is what makes it so identifiable.

The Mario Brothers ghost is another fun way to design your ghost tattoo. This tattoo is especially popular among people who enjoy playing the video game series. This ghost is named Boo. He is recognized as the common scary ghost enemy of the Mario franchise and first appeared in Super Mario Bros. 3. He is a spherical, white ghost with sharp teeth, a red tongue, and little “arms.” However, the most noticeable thing about his is his shyness. Boos only attack when you are not looking, but as soon as you face them, they freeze. This tattoo is an excellent choice for people who love this game and are shy.

Slimer is a popular character in the Ghostbusters movies. He is created out of pure Ectoplasm and is recognized by his green, frumpy look. While Slimer floats around with arms and no legs, he leaves a lot of slime on everything he encounters. He is able to pass through solid objects, but they will not go “un-slimed” through the process.

Maybe one of the most used ghost designs today is scary creepy horror ones. But it’s a personal choice and taste which one will you choose. No matter what design will go on to your skin, they are all versatile and full of symbolism. At the same time, this is a tattoo design that can vary from funny and amusing to scary and terrifying. If you have a good story behind the tattoo, every design is good, so that’s why it’s important to think before you ink.