The skeleton design is considered to be a tremendously powerful symbol since it is the personification of death and mortality. Long after the body’s flesh is gone, perhaps even for thousands of years, the skeleton remains, as a simple reminder of the end to which we all come. But frames are rarely seen lying in coffins. In the world of tattoos and tattoo artwork, they are animated, dynamic, and acting very much as though they were alive. While at first, these images might seem morbid or threatening, they are very much a part of religious symbolism and are used to celebrate the brevity of life.

One of the best things about skeleton tattoos is possibly the fact that they can be designed in a variety of different ways and combinations.

Moreover, the skeleton tattoo can also symbolize a life and death experience. Sometimes, it can be a symbol of survival over death. Due to this association, some men and women may decide to include personal logos and elements. You may find a skeleton tattoo on someone that has had a near-death experience also. For such tattoo designs, you should think about including symbols and elements that are personal to you, ones that are meaningful to you.

There are skeleton tattoo designs that portray the skeleton or skull dressed and detailed. Some frames may be decorated with a variety of different accessories. You may also see a skeleton dressed as a soldier. 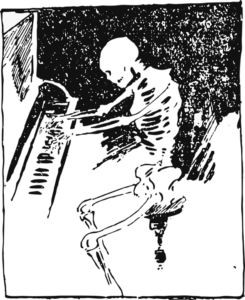