Supposedly, the devil is the personification of evil. Even though depicted in a lot of different physical forms, the devil is a wholly wicked creature that tempts, lures, as well as manipulates people into doing sinful or immoral deeds. While murder and stealing are apart from such deeds, the devil often represents self-indulgent, as well as self-satisfying acts.

According to folklore, this is a wild, cursed, and uncontrollable or selfish character that is on a mission to get a lot of human souls. In stories and legends, the devil is usually portrayed as a male figure, and he trades with people; he gives accomplishments, talents, money, or objects for their immortal soul. In Western culture, at least, the devil is said to rule in the underworld or hell. Those that give in to his temptations or make some deal with him end up in this afterlife. 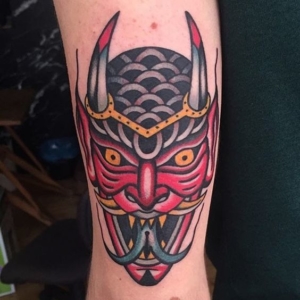 These tattoos are mostly so sinister that their look frightens the young minds, and also brings just negative emotions. Such associations are feeding on our inner voice since it was known for a long time that the devil is an antipode of God. It is generally accepted that dark forces are much more powerful, as well as aggressive. That is why such feelings of people as envy, greed, and also hatred are attributed to the creation of the devil.

The devil or Satan can come in a variety of forms in tattoo art – with bat-like wings and a tail; it is also dressed as fine gentlemen in a suit, with cloven hooves, in a grotesque version of a cathedral column; as a prince – but the most common is a horned, red demon.

As we already mentioned, the devil is the opposite of the divine and the antithesis of God, obviously connected with evil, but more importantly, for a tattoo, also connected with temptation.

The entire purpose of the devil is to deprive humans of the grace of God by tempting them into sinful behavior, as well as causing them to give in to their base desires.

A lot of people choose this tattoo, as well as its symbolism as each of us becomes a sinner easily and simply – then one will not have to think about punishing for sins that he or she committed, and they will not need to hide their viciousness from other people. However, it is not that easy to become a sinless person – you have to work hard and constantly extirpate your sinfulness, vices, and improve your inner motives, or accomplish good deeds.

Most tattoos are the symbol of mischievous or impish nature. The person might behave in a naughty, as well as wayward or troublesome way. This is actually of a character trait than any great evil.

Sometimes, these tattoos represent an old way of life. Someone that went through a hard time, such as a period of addiction or frequent fighting, might get a devil tattoo to represent the existence of temptation. Devils are sometimes portrayed as alluring, as well as seductive females, much like the old school pin-up girls. Such temptresses might be indulging in alcohol or gambling, making others to join the fun, and so on. Such tattoos may symbolize a slightly devilish nature or enjoyment that is found in wicked vices or activities.

Devil tattoos can appear in various forms, just like the devil folklore, as well as traditional stories. The stereotypical is often a red humanoid-looking creature that has horns, a forked tail, and a pitchfork. Sometimes, this devil resembles the God Pan, with legs that look like the ones of a goat and also with cloven hooves.

There is another representation of the devil, and it is a gargoyle-like creature that has enormous bat wings, fangs, as well as claws. The devil may also be illustrated as a pleasant man. He can look distinguished and well-groomed, wearing a black suit and seemingly well mannered.

This is frequently tattooed with an angel counterpart. Such tattoo design represents the balance of the good and the evil, sort of like a Ying and Yang. The devil is the one which portrays the bad actions of which a person is capable of doing, while the angel represents everything good. These tattoos mean that every one of us, or at least the person that wears such a tattoo, is capable of giving in to temptation and resist temptation. The person is neither completely good nor bad, but simultaneously encompasses both of the characteristics of the angels and the devils.

Looking at photos of these tattoos, it has to be noted that most of those sketches do not bring very positive emotions. It is understandable as even if the devil is depicted in various physical forms, it does not cease to be associated with the evil creature, the main purpose of it is to manipulate people, pushing them to commit sinful and immoral acts.

The tattoo of the devil is sometimes referred to as ‘hot stuff’ using the temperature of the residence of Satan to make another allusion to the attractiveness of the bearer of the tattoo.