The number of design options when it comes to tattoos is amazing. A lot of people tend to gravitate towards the animal or wildlife tattoos. They do so not only because of their love of animals but also because of the vast importance they have.

It is a fact that animals played a big role in the mythologies of many cultures, and they also had many qualities. Hence, depending on what you want, your wildlife animal tattoo to denote, you can make your choice.

There are many popular and creative wildlife animal tattoo designs and ideas for inspiration. One such tattoo is the tattoo of a jaguar. 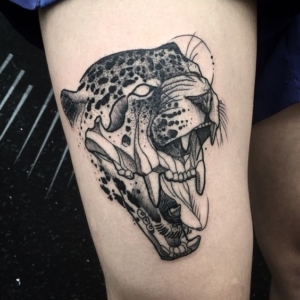 The jaguar, or Panthera onca, is a wild cat species, and the only extant member of the genus Panthera, native to the Americas. The present range of the jaguar extends from the Southwestern United States and Mexico in North America, across Central America. Also, it extends south to Paraguay and northern Argentina in South America.

Although there are single cats that live within the Western U.S., the species extirpated from there since the 20th century, the IUCN Red List lists the jaguar as near threatened. Its numbers are also declining. Threats include loss, as well as fragmentation of habit.

Overall, this animal is the largest native cat species of the New World and also the third-largest in the world. It is a spotted cat that closely resembles the leopard, but it is often larger and sturdier. It ranges across a variety of forested, as well as open terrains. However, its preferred habitat is tropical and subtropical moist broadleaf forest, swamps, and wooded regions.

The jaguar enjoys swimming, and it is a solitary, opportunistic, and stalk-and-ambush predator at the top of the food chain. As a keystone species, it definitely plays a significant role in stabilizing ecosystems and regulating prey populations.

While there is a prohibition on the international trade in jaguars or their body parts, the cat is frequently killed. This often happens in conflicts with farmers and ranchers in South America. Even though reduced, its range remains large. Given its historical distribution, the jaguar also featured prominently in the mythology of a number of indigenous American cultures. The most common ones are those of the Aztec and Maya.

Although these beautiful beasts are in the hearts of Central and South American for centuries, they are originally from Asia. The jaguar, the largest cat in the Western hemisphere, plays a decided underworld role in the cultures of these regions. This happens for centuries.

For the Maya people, the jaguar was an incarnation of the internal powers of the Earth, sometimes escorting souls after death. Glyphs that use the jaguar or its skin usually find their association with dreaming, spirits, and shamanic activity.

Tattoo imagery uses this animal in similar ways, sometimes depicting it in a naturalistic state with its leopard-like two-tone spots. Some other images use Mayan glyphs, typically the head with a canine tooth showing in profile.

We can say that jaguar tattoos embody all the positive traits this big cat possesses with centuries. For some people, this animal is secretive, reserved, stealthy, and powerful. These are the meanings they associate their tattoos with too.

Others appreciate the animal’s association with nobility, royalty, divinity, and spirituality. One of the traits which make this one of the most popular tattoo ideas is that this creature is intelligent. This animal is also brave, cunning, courageous, sophisticated, and elegant.

The jaguar is an ambush predator that relies on dominance, power, and strength to survive. These traits appeal to the masses. When we take one look at the intrinsic spots, we will never mistake the jaguar for another animal. Just like many of the big cats, the Jaguars are symbols of strength and dominance.

However, here are some other common meanings and symbolism that this powerful animal embodies:

Although the jaguar tattoos come in all forms, it is extremely rare to see them in all colors. The jaguar’s intrinsic beauty lies in its spots. Many artists tend to create designs that highlight the beauty and intricate detail of the perfect coloration of the animal.

Overall, the grace and beauty of this animal, together with its symbolism and meaning, make excellent tattoo designs.