Human beings are inking their skin with tattoos for thousands of years. This ancient practice was used to show status or also tribal affinity, or to decorate the body. However, it was sometimes used as a form of punishment. Researchers discovered that one of the oldest reasons for tattooing has a connection to spirituality. People used tattoos as their amulets to safeguard them against the unknown. Nowadays, tattoos are still ways in which people express their religious beliefs or spirituality. Tattoos are actually something more than only a physical alteration of the body. They are “road signs” that mark the spiritual journey of a person. For example, Christians believe that Jesus, the son of God, was born in this world, lived his holy life and died on a cross to save the world from its sin. Because of that, the cross is the reminder of eternal love, redemptive power, and saving the grace of God.

One such cross which has an important meaning for Christians is the Jerusalem cross. Below, we will talk about its importance and its use in tattoo art. 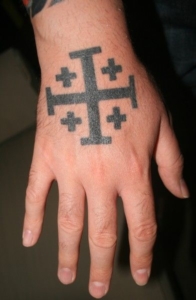 The Jerusalem cross is a heraldic design, as well as a Christian cross variant. It consists of a large cross potent that four smaller Greek crosses surround, one in each quadrant. The Kingdom of Jerusalem uses it as the emblem, as well as the coat of arms since the 1280s.

There are many variants to the design, which we call them Jerusalem crosses. They are with either the four crosslets in the form of Crosses potent or conversely with the central one in the form of a plain Greek cross. We should not confuse it with the Lorraine cross, because it is also known as Jerusalem cross.

The symbol of the five-fold cross seems to originate in the 11th century. However, its association with Jerusalem dates to the second half of the 13th century.

Its symbolism is the Five Wounds of Christ, Christ and the four quarters of the world, or the four evangelists. The St. Brelade Church first recorded the symbolism of five crosses representing the Five Wounds.

One team of American archaeologists discovered the symbol in the hidden tomb of the first Christian King of Jerusalem. According to the findings of scholars, the big cross in the middle represents the power of Christianity. The four other crosses represent how Christianity started spreading to the four corners of the earth. Also, the red of the garnets represents the sacrifice of God for man.

This symbol has a long history in the world of Christianity and also in the world of tattoos. The central form represents the Old Testament law. However, the four smaller Greek crosses represent the fulfillment of the law in the four gospels.

The Jerusalem cross is Christianity’s major symbol, representing the command of Christ to spread the Gospels worldwide, starting in Jerusalem. Just like we already mentioned, this symbol has five crosses.

This design is rich in meaning and symbolism, and it goes by many different names, such as Crusader’s Cross. You can also find it as a five-fold cross. This cross also represents the combination of the Old Testament and the New Testament teachings.

Another interpretation of this cross is the four evangelists, Matthew, Mark, Luke, and John, with Christ in the middle. We also mentioned that the four smaller crosses represent Christianity’s spread to the four corners of the earth.

The Crusaders later accepted this same symbol, as they were going to the Holy Land, during the Middle Ages. That’s why it can sometimes be present with the name Crusader’s Cross.

Usually, the most widely used interpretation is one of representing the five wounds of Christ. The smaller ones represent his wounds on the feet and hands. However, the large one is the wound from the soldier’s spear.

Generally said, crosses have a longstanding history as powerful cosmological and religious symbols. In some cultures, this design represents the Universe’s center, around which everything revolves. However, in Christianity, it represents the event of the crucifixion of Jesus, an important moment of the religion’s history.

These tattoo designs show up in different cultures in history. Sometimes, they can be the symbol of hope in war. Other times, they will stand as a connection between the spiritual and the physical.

Crosses are extremely popular tattoos, especially because of their deep and personal meanings. They also have historical and cultural significance and easily customizable design. The principal symbolism of this tattoo would be Christianity and Christian faith.

However, these tattoos, in general, can symbolize the following:

When it comes to the Jerusalem cross, you can use other elements or symbols to give it stronger meaning.  The variation possibilities are almost endless. However, you are not going to make a mistake if you use it alone, not in combination too.