Who says the spooky holiday season has to end with Halloween? Can Christmas be creepy? A man was breaking into your home to bring you presents, and a human-like goat has come to punish the misbehaving children. Did you hear of Krampus? Maybe you didn’t because you’ve been good this year. Is Krampus good or evil? The answer to that question lies somewhere in between. 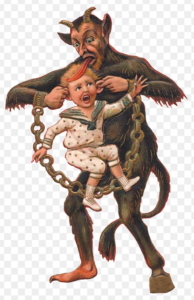 When you’re listening to the radio in December, it’s unlikely to hear holiday songs singing the praises of Krampus: A mangled, deranged face with bloodshot eyes tops a furry black body. Giant horns curl up from his head, displaying his goat/demon lineage. A horrific beast who beats people into being nice and not naughty.

In central European popular legend, Krampus is a goat/demon monster that punishes bad children at Christmastime. He is the “dark” companion of St. Nicholas. Krampus is believed to have originated in Germany, and his name derives from the German word Krampen, which means “claw.” In Norse mythology, Krampus is the son of Loki and Hel (the goddess of death). His origins are based on the Yule Goat, which symbolizes the beginning of the winter solstice. The meaning of Krampus progressed from a Pagan tradition to a more Christian belief around the concept of good vs. evil. The legendary beast shares characteristics with other scary, demonic creatures in Greek mythology, including satyrs and fauns.

Krampus isn’t precisely a dreamy image: dark hair, bearing horns, long tongue, and fangs. The anti-St. Nicholas comes with bells and chains that he swings about, along with a bunch of birch sticks meant to punish naughty children.

You better watch out. It’s Krampus

Religiously St. Nicholas is the patron saint of children. His celebrating day falls in early December, which helped tighten his connection with the Yuletide season. Many cultures welcomed the kindly man as a figure of generosity and benevolence to reward the good. They also feared their evil counterparts who punished the misbehaved and bad. Parts of Austria and Germany dread the beastly Krampus. Other Germanic regions have Knecht Ruprecht and Belsnickl, black-bearded men who carry lash to punish bad children. France has Père Fouettard and Hans Trapp and Netherlads have Zwarte Piet.

This legend is part of a centuries-old tradition in Germany, where Christmas celebrations begin in early December. Krampus was created as an opposition to kindly St. Nicholas, who rewarded children with gifts. Krampus, would punish “wicked” children, slap them, stuff them in a sack, and take them back to his lair.

According to legend, Krampus purportedly shows up in towns on the night of December 5, known as Krampus Night. The next day, December 6, is St. Nicholas Day, when children look outside their door to see if the shoe they’d left out the previous night contains either presents (a reward for good behavior) or “punishment” (bad behavior). Basically, this is the case: On that night, children leave boots on their doorsteps hoping Saint Nicholas will ignore them and bring presents. Krampus is said to leave a chunk of coal in your boot and beat you with a birch stick if you’ve been bad or naughty.

A more modern approach to the tradition in Austria, Hungary, Germany, the Czech Republic, and Slovenia involves men (sometimes drunk) dressed as devils who take over the streets. This is called a Krampus Run when people are chased through the streets by these masked “devils.”

Why scare children with this demonic monster? Maybe it’s a creative way for humans to get in touch with their wild, animalistic side. Such urges may be about assuming “a dual personality.” The character dressed as the beast becomes mysterious and, on some level, interesting.

Krampus is coming to town.

People suppressed Krampus’s frightening presence for many years. The Catholic Church prohibited these unpleasant celebrations. The fascist movement in World War II Europe found Krampus unacceptable because it was considered a creation of the Social Democrats.

But Krampus has been resurgent over the last few years, thanks mainly to a specific approach in pop culture, with people searching for different ways to celebrate these festivities in non-traditional ways. There are already reactions that Krampus is becoming too commercialized and losing his edge because of his newfound popularity.

Some people want to treat Krampus as some anti-Christmas symbol, which is absurd. That’s understandable because of his evil background. Also, his counterpart is St. Nicholas, who has a big role in Christianity. But you cannot portray one without the other. There’s no night without the day and vice versa. It’s strange that Krampus folklore was abandoned and seemingly captivated by Santa. He’s the one who now leaves coal in the stockings of bad children while rewarding the good ones. This, in my opinion, is a desperate way to represent only the “good” part of the myth for no reason at all.

It’s possible that his character was too much like the widely accepted Christian description of the devil, which is primarily not very accepted and playful. Whether it’s Saint Nicholas or Krampus, we’d all do well to remember that he knows when we’ve been bad or good, so we better be good, for goodness sake.

Appearance aside, Krampus’s tattoos almost always depict him as “the bad guy .”It’s no wonder that Krampus has also been more popular as a tattoo. Devils and ghouls from different cultures have long been an immensely popular theme for tattooing, and Krampus is no exception. In the tattoo form, Krampus is usually portrayed as quite demonic and is often done as just a head. Some people embrace the Christmas spirit with their Krampus tattoos and go for extras like holly, snow globes, snowflakes, etc. As a tattoo, Krampus is often done in blackwork style to emphasize how dark and menacing he is. Blackwork, Minimalism, American traditional, and Neo-traditional seem to be the most used styles to tattoo this beast in, but whatever style you choose, you can’t go wrong. This is a cool, interesting design with strong meanings and symbolism.