Holidays are rarely the subject of tattoo symbolism, but Halloween is a notable exception. Tattoos and the holiday of scares and candy go hand in hand. That’s why getting a Halloween tattoo is not an uncommon occurrence.

However, what exactly defines Halloween tattoos? Do ghosts, goblins, and witches define them? Well, we can say that.

Before talking more about Halloween tattoos, let’s see what does Halloween represents and what its importance is. 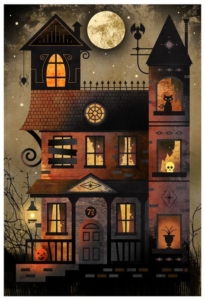 It begins the observance of three days of Allhallowtide, the period in the liturgical year which we dedicate to remembering the dead. Here, we also include saints or Hallows, martyrs, and all the faithful departed.

One wide belief is that many of the Halloween traditions have their origins from ancient Celtic harvest festivals. One such festival in the Gaelic festival Samhain and people believe that such festivals have pagan roots. However, they say that the early Church Christianized the Samhain as Halloween. But, some also believe that Halloween started only as a Christian holiday, separate from such ancient festivals like Samhain.

The celebration started in Britain, in order to mark various points of the year for the different peoples of the region. Its purpose there was to signal the end of the summer and the beginning of a new year. It was the time of renewal, but also s time of looking backward. This was so because they believed that the souls of the dead pay a visit on this evening.

In the modern-day, people celebrate this holiday for children, with costumes and parties. Such things recall something of the mischief and mystery that were originally part of the celebration.

It is not a doubt that Halloween always represented a time to be creative and have fun. There are many popular Halloween symbols that people often use to decorate their homes and clothes. Such symbols are pumpkins, cats, bats, owls, witches, and others.

Here are the most common symbols that you can use as tattoo designs:

One common practice among our ancestors at the time of the end of the summer was building tremendously brilliant bonfires. These fires would blaze the night for a lot of reasons. Such reasons were wandering off maladjusted energies, soften the chill in the air, prepare harvest feasts, etc.

Light magnetizes all manner of insects. Nature predators also come to the flame, looking for an easy insect meal. That’s why bats were a common sight at Halloween-time festivities. They have a connection with the theme of magic of this holiday. Also, they symbolize the passing from one phase of life to another, in the timeline of human life and season cycles.

Precocious, and mysterious, the cat has a close connection with otherworldly concepts, according to many beliefs. Black is the color of the unknown and mystery. It is also the absorbing element – taking on off-kilter energies and transforming them into purer frequencies. The color black can also be a suitable totem for the celebration. The black cat augers the connection with the intangible and serves as the bridge from the mundane to the magical.

The connection between Halloween and witches lies in their common ground in the supernatural, as well as magical aspects. The witch is actually a pop culture character known for crafting all sorts of dark tricks. Witches also play with hidden energies and interpretations.

We already said that Halloween has an association with the dark side and with the dead. That’s why the skeleton is there, in order to remind people of what will be left of them after death. However, skulls have deeper meanings, as they are the psychic center of the human being, according to many civilizations.

Turnip was the original vegetable that started this habit. People carved it inside and garnished it with a candle, in order to serve as guiding light for beggars and others roaming in the All Hallows’ Eve. When America took over this tradition, pumpkins replaced the turnips, as they were larger and more accessible.

Carving the pumpkins with scary faces and adding the candle inside has the purpose of keeping away evil spirits. The name Jack presumably comes from Jack, the weather sprite who announces the approach of winter.

All these symbols can find their uses in tattoo art, with all their specific purposes and meanings.