Lions are majestic animals, better known as kings of the jungle. However, even these beasts have a soft side. Just like any other animal, they will defend their offspring with their lives. The lion cub is symbolic of carrying on their genes. The life of the cubs is put in danger if another lion tries to mate with the mother. This is because lions will kill any offspring from the other lion. This is why the lion fights until death. This image is very symbolic and meaningful, and people often get the lion and cub tattoo. 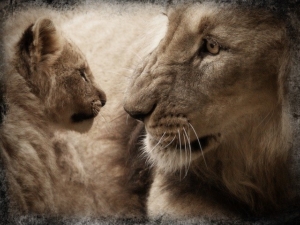 A lioness is capable of giving birth between one and four cubs in a litter. The cubs develop slowly, so the lioness keeps them hidden from the other animals. Cubs are entirely helpless for a while and can’t open their eyes until they’re between 3 and 11 days old. The lioness introduces the cubs to the pride when they are eight weeks old.

Because all lionesses give birth around the same time, they watch and take care of each other’s young. However, if another female has cubs three months or older, she will not join the pride. This is because there isn’t enough milk to go around. As a result, the other cubs will grow stronger while the smaller cubs starve.

Cubs begin learning to hunt around three months old. Opposing to the belief, the females aren’t the only ones who hunt, so all cubs must learn to understand this fundamental skill. They do this to defend their lives.

In the process of growing, cubs have two threats. These threats are starvation and invading from other male lions. When it comes to invading lions, males invade the females’ pride to take over. First, they kill or chase off any male lions with dignity. After they do that, they turn to the cubs and kill them if they can.

A tattoo of a lion on its own is a symbol of royalty and strength. However, just like with most things, the offspring can make one weak. You pull down your shield and let your soft out. The big and tough lion is only soft when it comes to its young.

This is why the lion and cub tattoo stands for protection and parental instincts. People who get a tattoo of a lion with their cub represent their relationship with their father. Their father was probably the one who always look out for them and defend them. Their father taught them everything in life and stood by their side as they grew up. It is also perfect for a memorial tattoo for a father that is no longer alive.

When the tattoo includes a lioness and their cub, it represents the relationship between the person and their mother. A lioness will protect her young with her life. People can get this tattoo to represent their mother and themselves. A mother can get this tattoo to symbolize her duty to protect her children. It is a powerful image that shows the strong bond between a mother and her child.

The tattoo of a lion and a cub symbolizes a lot of different things. There are many variations of this tattoo. Below are a couple of designs of the lion and cub tattoo that are very popular.

The most popular design includes a lion and a cub. Very often, the tattoo incorporates the characters of Mufasa and Simba. They are taken from the Disney movie The Lion King and symbolize a strong bond between father and son.

The lioness and cub tattoo is perhaps a more standard version. This is because the relationship between a mother and her child is the strongest one you will see. Women often decide to get this design when they have a child. With this tattoo, you reveal to the world that you will do anything to protect your loved ones.

This tattoo ether represents what your parent has taught you or what you plan to teach your child. The lion must teach his offspring to hunt to survive when they grow up. This is no different for humans. We must teach our children other skills, but, in a way, it is still the same. The child must learn to survive in the world on its own. However, the parents are always around to help along the way.

If you are keen on getting a lion and cub tattoo, you need to do your research. Make sure that this tattoo represents all those things that you want. You are always free to play with the design until you have the perfect lion and cub tattoo.