There are lots of insects on this planet, and some of them are very popular as tattoo a subject and design. One of them is the moth. The moth tattoo is especially popular in traditional American tattooing, and there is a good reason for that. These insects seem to fit in that style of tattooing. However, that doesn’t mean that it is the only style the moth should be inked in, but only that it looks great in that style.

Moths are an ancient group of insects with hundreds of thousands of species around the world. As part of a prehistoric family, the moth is significantly tuned to the flow of the earth and the moon.

These particular insects use the light of the moon to navigate them as they fly. This feature makes them a perfect symbol symbolize a proclivity towards nature and the rhythm of the universe. A person who gets a moth tattoo, for this reason, might want to reveal to other people that they have some goals in life, and they will stop at nothing to achieve them.

Over the years, moths evolved a lot, sprouting forth around the Jurassic period, evolving as the dinosaurs eventually died out. In primitive times, they were considered as spiritual characters that bring premonitory messages. This is an ideal tattoo meaning as it means that the owner is flexible and is willing to go through the difficult times because they know that they can endure them and that good times are waiting after that.

Very often, moths are seen as threatening, appearing only at night, fluttering out of the darkness towards the light. People who consider themselves as night owls might decide to get this tattoo because of this meaning. They don’t necessarily have to suffer from insomnia, though. If they are, that would be an additional reason to get some moth tattoo design.

As a symbol, moths can be both positive and negative, suggesting a chance and warning for the future. This moth tattoo meaning is perfect for people might who want to remind themselves that good things are always waiting for them. On the other hand, they might get the moth tattoo never to forget that death is right around the corner as well, so they have to live in the best way until that time comes. 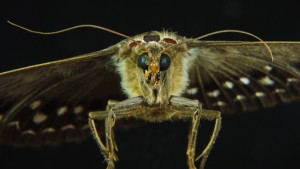 Because they transform from larvae to moths, they are a symbol of metamorphosis. This is the perfect moth tattoo meaning for all the people who want to experience everything that they can. In this sense, the moths can serve as a reminder for the owner not to get lazy.

As an image, moths are a great symbol of alteration and resistance to hardship due to their protective cocoon. This is the reason why butterflies are often a symbol of rebirth. Due to their nocturnal status, moths have become symbols of rebirth through death. When the moth tattoo design carries this meaning, it is often combined with someone’s name to show that even though they died, they will not be forgotten. A moth tattoo could also symbolize someone carrying on the bloodline of a loved one.

To better camouflage themselves from predators, the coloring of moths has evolved over the years. In this sense, the intricate patterns and dark colors become an icon of defense, rendering the insect invisible to its rapacious enemies. This is a cool tattoo meaning since people want to feel protected, and they don’t wish to tough obstructions getting in the way of their dreams.

As a result of evolution, even the patterns on the moths changed and served as evidence to the complexities of natural selection as they’ve become more like its surroundings. In this sense, we can see the adaptability of nature in the moth. When someone gets a moth tattoo to symbolize adaptation, they are typically brave and want to show that they are willing to adjust to the new surrounding as they move through their lives.

As previously said, the moth as a symbol represents alteration and metamorphosis. As an image, it is considered as a herald of change and a symbol of regeneration. In this way, the moth tattoo design can stand for someone overcoming a difficult time in their lives. For instance, someone who lost a job or is trying to start a new chapter in their lives can be a perfect candidate for this tattoo because through it they can show they are ready for everything.

Even though there are so many types of moths that have different colors, the most popular moth tattoos include the black and white moths. However, because there are so many species of moths, people are free to choose from their favorite type of moth, or their favorite color. Either way, the meaning stays the same regardless of whether the color is added, but the owner of a moth tattoo design could add in some essence with the color that they choose.