Generally said, sea animals are special and unique. As such, they can be excellent options to apply as tattoos. One such sea animal is the octopus. One of the reasons octopus tattoos are very popular nowadays is because of their endless beautiful possibilities.

The octopus tattoo, which is also called squid tattoo, is definitely one of the best tattoo ideas. A lot of people apply this tattoo design, both in the modern and the ancient world too. 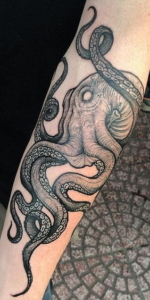 Below, we will talk about the characteristics of this sea creature, and its meaning and symbolism in tattoos.

The octopus is an eight-limbed mollusk of the order Octopoda. There are around 300 species recognized, and the order is grouped within the class Cephalopoda, with cuttlefish and squids. Just like other cephalopods, the octopus is bilaterally symmetric with two eyes and a beak. Its mouth is at the center point of the eight limbs.

The soft body of the octopus can rapidly alert its shape, enabling it to squeeze through small gaps. Octopuses trail their eight appendages behind them while they swim. They use the siphon for locomotion and respiration. They have a complex nervous system and an excellent sign. They are among the most intelligent and behaviorally diverse of all invertebrates.

Octopuses inhabit different regions of the ocean, which include coral reefs, seabed, and pelagic waters. Some even live in the inter-tidal zone and others at abyssal depths. Most of the species grow quickly, mature early, and live shortly. During breeding, the male octopus uses a specially adapted arm to deliver sperm directly into the female’s mantle cavity. After that, he becomes senescent and dies. Then, the female deposits the fertilized eggs in a den and cares for them until they hatch. After that, she also dies.

They have various strategies to defend themselves against predators. Such strategies are the expulsion of in, the use of camouflage and even threat displays. They are also able to get quickly through the water and hide. All octopuses are venomous; however, the blue-ringed octopuses are deadly to human beings.

Ancient Europe, from Greece to Ireland, used this eight-armed sea creature for decoration. However, we don’t know what the precise meaning that it had for these cultures is.

The octopus has the ability to capture prey with its tentacles and devour it with its sharp beak. That’s why the Underworld regarded it as a beast sometimes. In tattoo art, however, this animal takes a lot of different forms. These forms vary from richly colored Japanese pieces to small ornate blackwork designs. Moreover, they vary from small logo-like forms of great symmetry to back pieces that trail tentacles all around the torso.

Moreover, it has a particular association with women. There are either images of octopi with women or tattoos of them on women with the tentacles wrapping them everywhere.

Octopus tattoos look beautiful because of the endless design possibilities. However, more amazing are the attributes that have a connection with this aquatic creature.  The symbolism of an octopus tattoo comes from the varied qualities that this sea creature displays. For instance, they can disengage a limb, when under an attack.

This is a unique creature, you can use it in many different ways. Some people use octopus tattoos to symbolize the ability to redevelop and re-grow. This can be a sign of encouragement, particularly if a person lost something or lost their way in their lives.

The mystery that surrounds this animal makes it a prime candidate for a huge, diverse interpretation. This creature is the master of deception, it can easily escape an attack, and destroy predators three times its size. These are the attributes that a lot of people love to an association with their tattoos of octopus. As the octopus comes in different sizes, colors, and shapes, the possibilities of creating a unique tattoo are endless.

Depending on the individual octopus tattoo, it can symbolize some of the following things:

These qualities in this beautiful sea creature are common for a lot of people. This also permits artists to broaden the scope when it comes to coloring and design elements.

The octopus is an increasingly famous tattoo design. Both men and women embrace this animal as emblematic of culture, past experiences, and personality. As it is the creature of the deep, the octopus usually finds its association with mystery and the secrets of the ocean.

There is actually a wide scope for individualizing your octopus tattoo and making sure it is a unique one. Even some of the most famous designs are entirely customizable. Any good tattoo artist is going to have the ability to work extensively with you to make sure that the meanings and symbolism of your octopus tattoo are clear.