Home
Tattoo Meanings
Squid Tattoo Design With Different Meanings And Variations
Squids are enthralling and mysterious creatures that can live in the darkest depths of the ocean. They can change colors to replicate their environments and shoot out dark ink as a protective measure against enemies. The symbolism of squids, altogether with their variety in size, color, and shape, means that every squid tattoo is unique. The choice of design will ensure that no one else has a tattoo like yours.
Squids can come in all shapes and sizes, and their unique skills make them symbols of several different qualities and attributes. Even though technically spineless, as they are invertebrates, squids are not fragile or easily tread upon, as the term ‘spineless’ often connotes. Instead, their spineless quality makes them exceptionally flexible and hard to pin down. These animals are agile and graceful and often prove hard prey for their enemies. A squid tattoo can demonstrate your physical gracefulness or ability to adapt to changing circumstances as a symbol of flexibility. 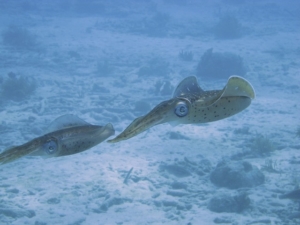 Squids are also intelligent and strong creatures, with several defense mechanisms to protect them from any underwater predator. Besides their quickness, squids have the chameleon-like ability to change colors and blend into their environments. In this way, they manage to ward off any nearby hunters. If a squid is exposed, it sets free its other defensive measure. That is a black cloud of ink that allows it to quickly and effectively hide from its opponent and gives it enough time to getaway. These different defensive traits make the squid a smart and quick creature that can fool most hostiles, making the animal a symbol of defense, adaptability, and creativity.

As underwater creatures, squids often stand for the attributes of water itself. Their capability to live deep beneath the surface of the water, and to seemingly float through their environment, embodies both the mysteriousness and flexibility of this element. Squids are also part of mythology and lore surrounding sailing and the ocean, as giant squids are extremely fearsome creatures that can inflict tremendous damage on almost any vessel sailing the high seas.

Since there are various squid tattoo designs, knowing what the squid symbolizes to you is very important and will make your tattoo unique and different from anyone else’s. Even though the squid represents many different things, some of the most common are:

Squids represent an incredibly diverse species of animals and can come in several shapes, sizes, and colors, allowing any tattoo design to be inherently unique. One squid tattoo can easily fill your entire back, or you could just as easily get a tiny squid on the base of your neck or the inside of your wrist. It is also possible for you to incorporate the squid out all over your body, with its head along your ribs and the tentacles going along your back or down your leg.

The giant squid represents a fearsome creature that can reach up to over 40 feet in length. Being one of the most fearsome and elusive creatures of the deep means that the giant sperm whale is one of the only predators that could catch a giant squid. This rivalry and contested strength allow the squid and whale tattoo design to have a particular meaning compared to other squid tattoos. When these two are represented engaged in a battle, that is an intense design that reveals your innate strength, bravery, and willingness to confront even the most challenging odds.

During the sailing time, a squid is sometimes portrayed as having the ability to destroy an entire boat, engulfing a ship’s sidings in its tentacles. Although this ability is perhaps more rooted in mythology than facts, it remains a powerful depiction of squids. Getting a tattoo that includes a squid/Kraken creature with its tentacles wrapped around a boat symbolizes one’s power and bravery in the face of any enemy, man, or beast. Moreover, it shows an affinity for sailor culture and life on the high seas, making this tattoo an excellent choice for anyone who worked as a sailor or served in the Navy. You can add even more intimate touches by adding other elements in the scene. People on board can be presented as one’s enemies, or the ship can bear the name of one lost at sea. The possibilities are truly endless.

Squid tattoo design depicting the squid as it shoots out its and protective ink is another popular design. By presenting the squid in this act of defense, you can demonstrate your ability to defend yourself against hostiles and to adapt to an ever-changing and, at times, dangerous environment. This is a kind of design that leaves you with a space to personalize the animal, choosing size, shape, and color suits your personality, in a way that some other squid tattoo designs do not. You can also add to the design by adding the enemy into the scene: maybe it is a shark, representing situations that have tried to keep you down, or a human hunter, recognizing man’s danger to himself.

Nonetheless, squid tattoos present a great opportunity to reveal your personality and traits to others. No matter whether you are dark and enigmatic as the ocean itself, or someone as strong and fearsome as the big giant squid, this tattoo provides exceptional symbolism that resonates with almost every person. Moreover, the variety of squids and potential scenes created in a tattoo design means that you are guaranteed to have a unique tattoo.