Just like other animal tattoos, parrot tattoos strongly evoke the characteristics and traits of this animal. These tattoos permit the wearer to show off his or her own personality.

A lot of cultures around the world see the parrots as symbolic animals. Linking your design to a particular artistic style or culture is another way of expressing your unique take on this animal too. 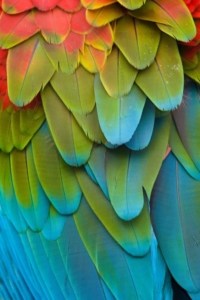 Generally said, the symbolism of birds is meaningful and layered. Their ability to fly represents a need for escape and freedom. Their melodies highlight nature’s sounds and the significance of communication. The affinity of the birds for traveling in flocks demonstrates an instinct for camaraderie and loyalty.

Parrots also share these qualities with other birds. However, they have their own unique traits too.

By nature, parrots are very social creatures and are also very intelligent. Indeed, they are able to speak human languages and “parrot” their owner’s speech.

Parrots are also known as psittacines. They are birds of the 393 species in 92 genera that make up the order Psittaciformes. This order is present in most subtropical and tropical regions. The order subdivides among three superfamilies, which are the Psittacoidea, the Cacatuoidea, and the Strigopoidea.

Parrots have a generally pantropical distribution, with a few species inhabiting temperate regions in the Southern Hemisphere too. The greatest diversity of parrots is in Australasia and South America.

Some of the characteristic features of parrots include a curved and strong bill, an upright stance, strong legs, and clawed zygodactyl feet. A lot of parrots have vivid colors, and some of them are multi-colored. Most of them exhibit little or even no sexual dimorphism in the visual spectrum. They actually form the most variably sized bird order in terms of length.

The most significant components of the diets of most parrots are seeds, fruit, nuts, buds, and other plant material. Several species sometimes eat carrion and animals. Lories and lorikeets feed only on floral nectar and soft fruits. Almost all of the parrots that exist nest in tree hollows. They lay their white eggs from which the young are born.

Parrots, together with the ravens, jays, crows, and magpies, are among the most intelligent birds. The capacity of some parrots to imitate human voices enhances their popularity as pets even more. Trapping wild parrots for the pet trade and hunting, or habitat loss and competition from invasive species, diminished wild populations. They are the greatest subject of exploitation among other birds.

The parrot has a long association with humans as a favorite pet. Parrots are also a popular tattoo image, owing partly to their abundant color. Also, this is because of their place of affection as pets among humans. Their images recall their origins in the tropics.

The parrot tattoos give the wearer the chance to show off their own uniqueness and secretive side in a colorful manner. People from different cultures highly respect these symbolic birds. Their symbolism is as diverse as the authentic color combinations of their feathers.

For some people, the parrot can represent wanting to fly away. For others, it will represent an appreciation for their beautiful songs and sounds. The colors of the parrots may be unique as a human fingerprint. However, the different meanings behind these birds connect with a lot of tattoo lovers. Parrot tattoos can represent human compassion, freedom of adventure, and communication.

You can draw your parrot tattoo design in a lot of different ways. Each of these ways will be with its own unique meaning and symbolism.

When you are choosing what parrot tattoo design will work best for you, consider if there is some culture or trait you would like to represent. This could add some unbelievable uniqueness to your tattoo design.

For example, if you tattoo a parrot in a totem design, it will link its meaning to Native American symbolism and culture. Also, it can connect with your own heritage.

If you pair the pirate with the parrot, it will symbolize freedom of adventure, living fast, dying young, etc. Also, it will represent the affinity for the legends connected with piracy.

Also, for those who would like to express their passionate side, or their ability to find true love, the parrot tattoo will be a beautiful and powerful tattoo for them.

Parrots are an excellent unisex tattoo, and they look excellent on every person, regardless of the gender. They are easily adaptable to the size of the area you want to place your tattoo.

So, one of the greatest things about these tattoos is that they look great on both men and women. You can place them everywhere you want, your arm, leg, chest, shoulder, or back. Also, the color combination you choose will speak volumes to your creativity, boldness, and personality.

So, choose wisely, and you will never be wrong.

Over the years and all over the world,