As a transparent, odorless, tasteless, and almost colorless substance, water holds great and very important meaning in the world. It is well-known that most of the human body is made out of the water, and that nothing in this world can live without it. How is that for a meaning? In the tattoo world, no matter if we talk about sea or river water has a deep and symbolic meaning. It represents many things, and its symbolism can vary. 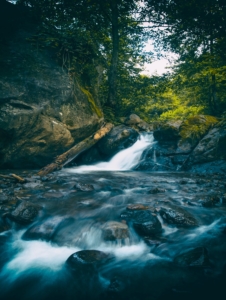 Many believe that water has a meaningful connection with the soul like it can cleanse the body as well as the mind.
As a tattoo, water can represent several things:

As a design in the tattooing world, the shape that it can be most often seen is one of a river, which in mythology also holds a deep meaning.
A river usually symbolizes the power of nature. Still, it is also very often associated with time – used as a metaphor for time, as something that is always moving, as water will find its passage through anything, as well as time – it cannot be stopped.
Also, it stands for something irreversible. Flows straight, and it can change it’s current or course, left or right, but it can never change its way.
In ancient cultures, rivers also represented fertility.

A person that has a river tattoo usually means that someone is finding his or her way in life through all the challenges and obstacles that are presented on the way. The position of the tattoo usually is decided by its size and everything that counts in it. Since rivers are always associated with nature, the sea, this tattoo can be a full landscape portrait, consisting of mountains, forest, vividly colorful flowers, creating a full image for an enthusiastic nature lover.

Though the black and white ones don’t fall behind, depending on the creativity and the image that the wearer wants to depict, there are many full black and white captions of river or water with or without nature included, some artists can do amazingly good work with.
A full sleeve or leg, maybe some Japanese style sea waves and added Koi fish, or a small picturesque symbol enough to fit the inner elbow, this tattoo is perfect for the restless souls that the fast current of live drives them straight finding the way through everything.

This is not a design that goes well by its self. In my opinion, the river tattoo design goes well with nature scenery like trees (woods), mountains, etc. But putting all that aside, I think its a motive that’s dynamic and alive.