Shepherding belongs to the group of the oldest occupations. The domestication of Sheep was a gateway to the human development of advanced civilizations, so it’s not surprising that these majestic animals play a massive role in mythology and religion. Since man first learned to farm, these animals have been integral parts of humanity. 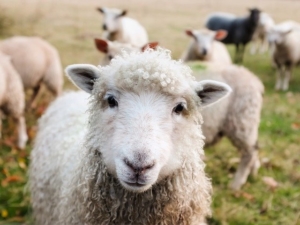 Goats and sheep are considered to be among the first animals to be domesticated for everyday use and exploitation. However, sheep have an exceptional place in our psyche.

Sheep or lambs have become an important religious symbol for purity, perfection, sacrifice, and even reverence. In Abrahamic traditions like Islam, Christianity, and Judaism, sheep were the perfect sacrificial animals. From this account comes the use of the popular saying ‘Lamb of God.’ Eid al-Adha is a popular annual Islamic festival that celebrates Abraham’s devotion and submission to God by sacrificing choice animals, mostly Sheep.

It’s no surprise at all that in the Christian tradition, Christ is considered to be the ultimate shepherd. Christian followers, because of that, are his flock of devoted and spiritually pure Sheep. There is a reflection of this concept in every aspect of Christianity. The Christian church leader is called a ‘pastor,’ which is the Latin word for ‘shepherd.’

If you are a person that counts Sheep to fall asleep, you can thank the British for that. The tradition of Yan Tan Tethera originates from the early English shepherds who used to count their stock. The shepherds count the numbers aloud in a manner that sounded like a rhyme, with adjacent numbers sounding similar. In this numeric system, 1 – 2 – 3 – 4 is known as Yain – Tain – Eddera – Peddera. Imagine counting the whole herd like that. It would be a cure for boredom to set in and sleep to take hold. During the time of the Industrial Revolution, the practice Yan Tan Tethera fell out of favor. However, the idea of counting these animals became synonymous with falling asleep.

As a zodiac sign, these individuals are compassionate people given to flights of fancy and deep creativity. These people love things of beauty and will surround themselves with luxurious items whenever possible. Clothes are among these things, and you can count on a Sheep to know the latest fashions. They are also afflicted with shyness and pessimism.

The Meaning of Sheep Tattoos

Sheep have become the personification of humanity’s best traits, such as:

There is a whole range of different tattoo designs, starting from the ethereal to the comically absurd. No matter whether you want a tattoo that shows off your rebellious, wild nature or your spiritual personality, there’s a sheep tattoo that’s perfect for everyone’s taste. Popular tattoo designs include:

In the many different cultures from which the individual designs originate, tribal patterns own a deep spiritual significance. Putting the fact that the exact meaning of each tribal pattern is still shrouded in mystery aside. One thing is certain: A tribal tattoo design is a great way to pay homage to your spiritual side. The crucial reason behind this is that both the patterns and the animals used to portray are deeply rooted in the divine and the philosophical.

This tattoo design is ideal if you are a rebel and someone who never plays by the rules. Following the herd is something specific that you will never catch this kind of person dead doing. If you received the label a ‘black sheep,’ getting this tattoo design is the way to show that you’re proud of that title. In nature, a recessive gene is a reason for the codes for black fleece. These poor creatures were victims of commercialism. Because the black wool is so difficult to dye, wool traders (and eventually the general public) declared black one within a herd as a sign of evil. Nowadays, being called a ‘black sheep’ means that you refuse to conform to the status quo.

Starting with the all-cartoon sheep characters, lambs are the ultimate symbol of childhood innocence. They are mainstays in fairytales, children’s literature, and toys for toddlers. A tattoo design that includes a cartoon sheep is a way to reconnect to your childhood. This is also a perfect choice to celebrate your child’s innocence and beauty or any other child in your life.

Going from counting Sheep to being a black one, choosing the right tattoo design is tricky. It is crucial for you to find the one that goes with your personality, style and shows what you want to express to the world. You should also think about where your new ink will be placed on your body since your tattoo position is just as important as its meaning.