Most often, people in the military are those who wear this kind of tattoos since the knife was very popular during multiple wars. In reality, lots of American military personnel returned from World War II, having bought these popular knives as they were only produced in Europe during that time.

What’s interesting is the fact that a lot of people like to get their switchblade tattoos to represent that they believe in the right to defend themselves with knives like the switchblade. Very much like classic guns, the switchblade is a traditional knife, and people like to get images of items that cause amazement for people of all ages. If you are a person who wants to proudly reveal that you can take care and defend what’s yours with your own two hands, then you might find this switchblade tattoo meaning to be the just the one to use. 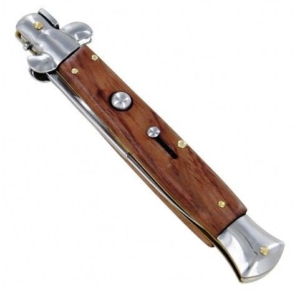 A further very popular switchblade tattoo meaning is pain. In other words, this can mean that in the past, you have been through a lot of pain or even that you aren’t scared of pain. It is possible for this meaning not to be evident to everyone who sees the tattoo, but that might be okay for some people as it could be a very personal meaning.

This tattoo is also often used to represent revenge. This doesn’t necessarily mean that the owner of the tattoo wants to use a switchblade to get revenge. Most often, it merely means that the person will hold grudges, and they will take revenge on the enemies in their way. Revenge is one of the more popular prison and gang-related meanings when it comes to this tattoo as well, and in most cases, the switchblade symbolizes going after their enemies with their knives.

Fearlessness is not so popular, meaning that it can be related to switchblade tattoos. The knife on its own can symbolize someone’s belief that they have the “weapon” inside of them to face anything that comes their way. This meaning can also be used in a motivational approach to encourage the owner to face their fears every time they are confronted with them.

There are times when people decide to get their switchblade tattoos to represent that they are “sharp,” as they are perceptive, and they are clever. In reality, you can use almost any other knife to represent these things, but the cool look of this design makes it the top choice. The fact that there are only a few other images that can represent this is why if you are known for being “sharp as a knife,” you might discover that a switchblade design is a perfect option for you.

Most people decided to get the switchblade tattoo for its cool looks, even though there are so many great meanings that can be attached to it. The design of this tattoo can include a classic or customized handle, there are different ways to design the blade, and it’s pretty easy to make it fit anywhere you want to place it.

There are different ways to design a switchblade tattoo. For instance, you can have an old-school wooden-handle design, or you can even get the modern look of the design. You can combine the knife with other elements, like flowers, to add in even more meanings, or you can get only the switchblade.

The placement of a switchblade tattoo highly depends on the design you are going to choose and whether you are going to combine it with other elements or not. If you want a simple tattoo that includes only the switchblade, the best way to get it is as a forearm tattoo, a leg tattoo, or you can even have it straight down your back. If you are want to get a larger tattoo where you can combine the switchblade with other images, the best thing to do is consult your tattoo artist about the best option to have it inked and make the decision together.

Have you ever been searching for a symbol