The bear in the Pacific cultures like the Haida and the Kwakiutl is a symbol of the same things which it symbolizes for some other cultures in the world. These meanings are undoubtedly derived from the nature of the animal itself, no matter where it seems to originate.

In Northwestern myth, the bear is a supernatural being of the land that is strong, aggressive, as well as fearless. In different types of designs, which include tattoos as well, the bear is identified by its massive but short muzzle, rounded and ferocious eyes, and wide, flaring nostrils. It also has long and pointed claws, and the teeth and fangs are also often shown. For warriors, the bear was a sign of fierceness. 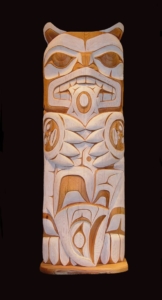 In the Haida tribe, just as with a lot of other different types of popular tribal tattoos, the meanings are not quite the same as their original native purpose, as well as symbolic significance. However, unlike most tribal tattoos which are simply based on a design and color combination, it is quite easier to discern the meaning of this tattoo, based on the fact that animals represent key human traits. Each animal provides different meanings. For example, the bear represents strength, power, as well as fierceness. In this culture, each animal is imbued with a particular force, and because of that, the meaning of Haida tattoos is rooted in the symbolic importance of a given animal, in this case – the bear.

Kwakiutl is North American Indians who traditionally lived in what is today known as British Columbia, Canada, along with the shores of the waterways between Vancouver, Island, and the mainland. Their name for themselves means “those who speak Kwakwala.” In this culture, the bear is a symbol of strength, introspection, spiritual journey, and healing.

People choose to get the design of the body art of Haida and Kwakiutl as they are fond of a particular animal, and also find that these kinds of tattoos are a creative format for expressing that. For example, the bear has extreme symbolic value, and it is a popular choice despite the different tribal meanings it has.