Home
Blog
Ten Not So Common Tattoo Designs And Their Place In Tattoo Art.

Body art, bodybuilding, walking billboards, self-graffiti, fashionable ink accessories – each of these several expressions depict the physical nature of the tattoo. What is usually not discussed, however, is the emotional side of tattoos. Nowadays, tattoos are controversial. Now, they are more accepted than they were ever before. We can even call them trendy. Also, the tattoo artist profession becomes a popular career choice more than ever. Tattoos and tattoo designs are a controversial starter. Either there is a story attached to them or a skin-showing session, or also an emotional response which is derived from the sight of ink art. Also, the emotional responses from the sight of tattoos can lead to a present-day version of social branding.

People tend to get tattoos for a lot of different reasons, such as for self-expression, attention, artistic freedom, visual display of a personal narrative, rebellion, reminders of cultural or spiritual traditions, addiction, sexual motivation, and so on.

According to some research studies, about 15 to 38% of Americans have a certain type of long-term body art. Some people decide to mark themselves for life in order to remind them of past family members or also ancient sayings or religious scriptures or names of their current family and love interest. Others use tattoos to enhance their sexual prowess or feed their exhibitionist side, and a lot of people utilize tattoos in order to visually promote their identity or group affiliation.

Whether we like it or not, tattoos are growing in popularity every day. The long-term fear of being market for life is being tempered by tattoo removal technology and people getting used to seeing tattoos. 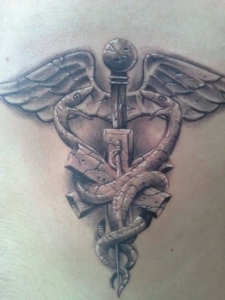 Here, we are going to talk about ten tattoo designs, which are not that common among tattoo lovers but found their place in tattoo art somehow. Here they are:

Eels are akin to serpents in their symbolic meaning. However, they are also usually associated with primordial emergence as they are sea creatures. In ancient Egypt, the eels were the symbol of the rising sun, while in Celtic lore the war goddess turns herself into an eel and then wraps herself around the hero that has spurned her. In some parts of Polynesia and also ancient Phoenicia, eels were sacred, and there is no denying their phallic importance too. Tattoo art actually revels in the many exotic colors, as well as coiled positions that eels take in nature.

The eightball, which is from the game of pool or billiards, is actually the black ball that is at the center of the rest. The primary seven balls are solid colors while the last seven are striped with white. The phrase “behind the eightball” actually means bad luck, as if the eight balls are pocketed or also misplayed during a game, that player loses. Additionally to this, the eightball tattoo designs associated with sodomy in certain contexts, such as in the case of prison tattoos, or with drug use as well, as slang for an eighth of an ounce of cocaine.

Translated loosely, Ek Onkar actually means “one God,” and it is derived from the Sanskrit Om. Sikhism, which is a religion centered in India and combines teachings of Islamic Sufism and Hinduism, was founded in the late 1400s and the early 1500s by the primary Sikh guru, a mystic that was named Nanak. The most important words that were utilized in Sikh teachings, Ek Onkar, emphasize the oneness of God, a basic tenet of Sikhism.

Images taken from the tarot cards are not uncommon in a tattoo. Their appeal lies in the archetypes subjects or persons that they actually depict, of interest to every one of us, particularly if they could work to foretell the future, as well as explain the present. In the emperor card, the fourth tarot, the symbolism is generally shown: empire, success, supremacy, and power.

The empress is actually the third tarot, and she is resplendent power incarnate with her crows, eagle shield, and a scepter. However, there are two sides to the empress, one which emphasizes the use of power in order to satisfy her vanity, and the second one which uses power to rule justly. In tattoo art, and in general, the empress is the symbol of female nature in its entirety, idealism, persuasiveness, gentleness, and sometimes weakness.

E.M.T. or emergency medical technicians, dispatched to the scenes of medical emergencies, use a symbol that is similar to the caduceus of medical doctors in some respects. Just like the caduceus, the central motif of this symbol is a serpent coiled around a staff. However, although the modern caduceus is produced from the confusion of symbols from the staff of Asclepius and Hermes, the E.M.T. “Star of Life” remains true to the form, utilizing a staff of Asclepius, who was a healer and the son of Apollo. The six-barred cross which appears as the background to the serpent and staff stands for the six-system function of emergency medicine: response, on-scene care, care in the transfer, transfer to definitive care, and deduction. The people of E.M.T. are really proud of what they do, and their role in saving people’s lives, so they choose the symbol for tattoo designs.

The Enneagram is actually a nine-pointed star which is utilized and seen in many ways. In Christian symbolism, it actually stands for the nine gifts of the spirit, which are: love, peace, happiness, patience, benevolence, leniency, loyalty, temperance, and humbleness. In the Jewish mystic symbolism, it represents the essence of being.

Eve is the second human creation of God and is also the first woman in Judo-Christian, as well as Islamic tradition. It is the symbol of motherhood and womanhood, as she is the mother of the human race. However, owing to the role she has in the introduction of sin into the world, she represents the fall from grace and temptation.

There is not much information about the evil spirit of Haida mythology except that it is half man and half bird, and that it lives in the mountains, feeding of whales and humans. It is an image that is not often utilized in traditional arts of the Pacific Northwest; however, it was documented as a tattoo design in historical times. Even though these tattoo designs are essentially schematic line art, it shows a human torso, human arm, and a human leg, and also head with a beak, a wing, claws for feet and hands, and sometimes tail feathers too.

Even punctuation marks appeared in a lot of tattoo designs. The exclamation mark of Western alphabets, which is a dot with a vertical line above it, makes a fitting end to any series of symbols, which add emphasis and serve to focus our attention. The symbol is utilized by itself in certain contexts, in order to express surprise, or even something unusual.