Home
Tattoo Meanings
The Boat Tattoo-Journey, Home,Hope, As Well As Bravery And Honor

Naturally, boats and all manner of ships figure hugely in maritime tattoo art. A couple of specific examples are discussed elsewhere, but the boat tattoo is a symbol for voyage or journey, not much different from its actual usage.

The aquatic world always had some kind of impact on the tattoo world, with men who were at sea getting tattoos dedicated to the sea gods or considering them as some kind of lucky omens. 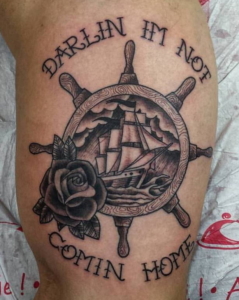 However, we cannot think of these earlier tattoos without some seamen walking into our mind, that strong is the connection of this world with the tattoo world. That is why it is not a surprise why all those people like to get boat tattoos done, as it is an important part of the water world. It can be as small or as big and grandiose as you want it to be.

Nautical tattoo, especially boat tattoo is very popular in the history among sailors, as well as other seafaring professions. Although they are traditionally worn by men, in today’s modern world, women are just likely to sport them. They may be portrayed with a variety of different elements and symbols, which include pirates, swords, ship wheels, anchors, stars, as well as compasses. Even though they can be done on any scale, due to shading and detail, they often end up medium to large-sized. They are not considered a mainstream design, but they are always popular and can represent far more than just the ocean.

Boats symbolically become vessels for the transportation of the soul in the afterlife for many different cultures, and they also figure in mythological quests, as well as ancestral migration stories. A lot of boats are christened with names and imbued with personalities, and they are even referred to by personal pronouns. For sailors, they, for sure, held the same meaning, but they also represented home, as well as hope. Some other meanings of boat tattoos can be: