Sailboat tattoo design is one of the most popular designs in the tattoo culture. This especially goes when we talk about the traditional American style. But let’s start from the beginning.

When humans learned how to catch the wind with material to make a boat move, a new era began. In the earliest rafts and boats, they used animal skin for the sails. Ancient Egyptians made these sails by using mats and weaving reeds into them. This means that the Egyptians were the first creators of sails made of cloth around 3300 BC. 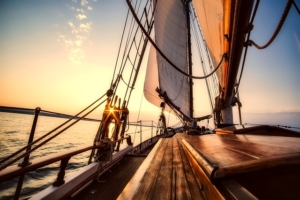 They were not the only ones since the great Phoenicians also sailed with cloth sails. Over the years, lots of different materials have been in use to create sails. Such materials are flax, jute, hemp, and ramie.

Even though flax was the main material in use, the cotton replaced it as cotton processing became easier. The cotton sail was popular as they used it on a yacht from the United States called America for a race. The US yacht sailed around the Isle of Wight off England’s coast and beat 14 British sailboats.

The first sailboats out in the waters started as simple rafts and single logs. With the progress of time and learning, they used more intricate logs. A great deal of this was moved along by the military. There were also merchant sailors who were trading extensively throughout the Mediterranean Sea. Some of them were day-sailers made for men who used it for recreation and fishing. There were also minor duplicates of these ships called cutters and schooners.

Around 1900 naval architecture started to take place. They built more efficient hulls and other parts of the boat for a fast and efficient boat. Since that time, aerodynamics is also a focus, and now these sailboats can move extremely fast.

Sailing can also symbolize a spiritual voyage. This means that someone with that sailboat tattoo might be heading towards their clarification. Such tattoos are a perfect way to keep things in perspective and remember what your goals were. In that same realm, sailing also represents discovery, escapade, and new beginnings. Your spiritual journey will be a quest that is not going to be easy. This is because when we are trying to figure things out in our lives, that is not always easy. We might be going through some challenging times. In terms of sailing, we are heading right into the storm or are already in it.

The sailboat can also be a symbol for those that are actually on the water a great deal. People decided to get these nautical tattoos to represent their place in the world or their past interests. Sailor Jerry tattoos incorporate the ship and other nautical themes. They were significant for the sailor, and lots of those tattoos are still popular even today. Although the reason might not be the same, there is respect involved in our history of sailors.

Some many designs and symbols can be part of the sailboat design to improve the symbolism. Below are a few designs of sailboat tattoos and the symbolism that is attached to them.

In this style of tattooing, traditional sailboats or Sailor Jerry ships are extremely popular. This design might serve as a representation of the lifestyle of the person wearing that tattoo. Moreover, a ship with full sails tells the story of a sailor’s trip around Cape Horn. Cape Horn is the part of the ocean where the Pacific and Atlantic meet.

The combination of a sailboat and lighthouse in a tattoo is one that symbolizes safety at sea. The lighthouse is the symbol that protects your ship from crashing into the rocks. This tattoo also symbolizes shelter and home.

The combination of a sailboat and a compass tattoo is a symbol of navigation for the sailor. The compass symbolizes a sailor’s ability to always find his way back home. Not all sailors were lucky enough to return to their families. This is why any symbol that brought good luck was a welcome symbol.

A sailboat tattoo is unique in its sense, just like any other tattoo design. There are many other reasons why you should consider getting a sailboat tattoo. However, those mentioned above are enough for you to decide and get this tattoo.