If you are about to highlight some specific aspects of your personality, animal tattoos make an excellent choice. Animal tattoo designs are the perfect way of symbolizing your favorite traits by celebrating the animals which share them with you. One tattoo design that will attract your attention will be the donkey tattoo, especially if you are a follower of the Democratic Party in the US.

However, first, you need to know what they mean. When you are not quite sure which animals best represent you, you can search for several of them on the Internet, read about their meaning and symbolism, and after that decide which would be the most appropriate.

Animal tattoos can appear in a wide range of shapes, styles, and sizes. They also have specific meaning and symbolism across various cultures, religions, and beliefs in the world from which you can choose the best. They are going to show you why inking on your favorite animal may be an excellent way of expressing yourself to this world.

Here, we will talk more about this tattoo design, and what does it mean and symbolize. 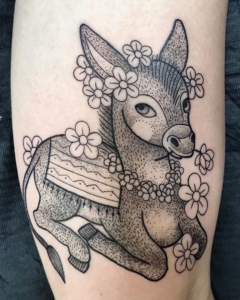 The dominant worldview of Democrats has once been social conservatism and economic liberalism which populism has been its leading characteristic in the rural South. The Democratic Party also promoted a socially liberal platform that supports social justice.

Nowadays, the House Democratic caucus is composed mostly of centrists and progressives, with a small minority of conservative Democrats. The philosophy f the party of modern liberalism advocates social, as well as economic equality, together with the welfare state. It seeks to provide government intervention, as well as regulation in the economy.

The now-popular famous Democratic donkey has been first associated with the Democratic Party of Andrew Jackson from the 1828 presidential campaign. The opponents of Andrew called him a jackass (a donkey), so Jackson decided to use the image of the strong-willed animal on his campaign posters. Later on, the cartoonist Thomas Nast utilized the Democratic donkey in newspaper cartoons and made it a famous symbol.

In the fall of 2010, the Democratic Party created its new symbol, with a blue D inside a blue circle. It was the first official logo of the party, and the donkey logo had only been semi-official. Nowadays, Democrats say that the donkey is smart and brave.

The donkey, or ass, took on a lot of different associations for as long as it was utilized as a symbol. Even nowadays, in the United States, the donkey represents the symbol for the Democratic Party, even though it is synonymous with being obstinate and ignorant.

In Christian iconography, the humble donkey is present in the manger of the Christ Child and is also ridden by him in his triumphal last entry into Jerusalem. Medieval adulterers in Europe had to ride through the streets on a donkey, but the Greek god Dionysus also rode one.

In tattoo art, the donkey tends to be a comical type of character most of the time, a character that plays mostly on the modern Western themes of stubbornness.

If the bearer of the tattoo is an America, it means that he or she is the supporter of the Democratic Party. If the bearer of the tattoo is a resident of the Middle East, it may mean that he is Christian and a pacifist, as the donkey symbolizes the animal that carried Mary, the mother of Jesus, into Egypt to avoid Herod the Great, which means avoiding a political confrontation. It may also mean that the person is a donkey breeder and enthusiast.

During the Second World War, the supply corps to the sixth British army had a donkey on their insignia. A few members of the corps had such included in their body art.

The donkey is symbolic of versatility, eager worker, intelligence, determination, spiritual dedication, stubbornness, underlying faith in the creative force, as well as willingness to take on board the responsibilities and burdens of others.

For a long time, donkeys were misrepresented and misunderstood by the ignorant masses. The donkeys have been domesticated for the first time about 4.500 years ago, and they were seen as the status symbol for their owners. Versatile, as well as eager workers, with a kind nature and also gentle intelligence, the donkeys can live for 40 years or more.

In real life and tattoo art, the colors of donkeys can range from grey, brown, tow white. Generally, they have white muzzles, rings around their eyes, and light bellies. Some of them have some markings on their back which look like a cross. Some can also have leg stripes. There are different tales that tell of how the donkey came to get the cross on their back.

What do you think about the donkey tattoo design?