Home
Tattoo Meanings
The Meaning Of The Rooster In Different Cultures

Going back in time, it is evident that animals hold a long history as visual symbols. In fact, since the beginning of art, people have been depicting animals to convey various meanings.  A single animal represents a handful of different ideas depending on the culture and time. People enamored with animal tattoos most often make the decision based on the symbolic meaning associated with the bird called the Rooster. One, for some people, an odd choice of an animal tattoo, is the tattoo of a rooster. 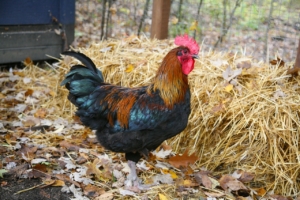 As odd as it might seem, this bird actually holds strong ties to the sailing culture, Eastern symbolism, and Celtic and Norse mythology. As one common domestic animal found all across the world, a rooster can hold memories of childhood and family times or simply the qualities and traits of your personality. Despite their different meaning, a rooster tattoo is always genuinely unique and personal for the individual that wears it.

In the world of tattoos, a large number of tattoos originate from maritime and the adventures of sailors like the ship, the anchor, the wave, etc. Although a bit strange, the rooster tattoo is tied with sailing culture. At first glance, it seems that this bird has no connection with sailing and maritime or old-fashioned tattoos. However, in the past, the sailors believed that a rooster tattooed on the right foot, and a pig on the left will protect the sailor from drowning. Because of that, the tattoos of a rooster and a pig are considered as lucky charms.

In Celtic and Norse mythology present this bird as a messenger for the underworld. Within this belief, the rooster cries out in a time of danger and call out the souls of those who have fallen in battle.

When we talk about this tattoo design, different variations are very popular for ink enthusiasts. Probably the reason behind this is that the rooster symbolizes different traits, and the choice of style depends on what you want.

A fighting rooster is a very popular choice with an obvious symbolism of aggression.  We are familiar with the nature of this animal that is very territorial and will do anything to protect that territory and his hens. Because of this nature, there are some countries in the world that practice cockfighting. The cockfights are considered as sport and entertainment that often but not always end with death. This type of bird is specially bred and trained.

As previously mentioned, a rooster and a pig as a tattoo are very popular and well known as a lucky charm.

A Japanese rooster tattoo as part of the Japanese culture represents courage and auspiciousness. All across Japan, these birds are known as messengers of the gods.

In Korea, these birds are considered as very intelligent animals that understand time, so it’s not surprising that Korean rooster tattoo is top-rated. For them, roosters have admirable qualities due to their willingness to fight to the death.

The rooster is a male chicken and a male symbol, and women can also get a rooster tattoo.  They can be done in different colors and styles.

Other meanings of a rooster tattoo

Although most of the meanings behind this tattoo are positive, there are some that are negative, just like with any other tattoo. You decide what kind of meaning your tattoo holds. Most often rooster tattoos stand for:

Like any other tattoo design, this tattoo design can be stunning if done correctly. A skilled tattoo artist always knows how to play with the colors of the beautiful feathers of this bird that can vary from blue to red, orange, purple, brown, black, red, green, yellow, or white. There are many cartoons with roosters, and that is why the tattoo of a rooster can depict either cartoon design or realistic design. The design of the tattoo can include the whole bird. However, there are some designs where only the head of the bird is inked. For individuals who are in love with black and white designs, the tattoo of a rooster is a great choice done in tribal art. These types of tattoo designs include a lot of details. A rooster tattoo can always be done in combination with other tattoo symbols. It is a common knowledge that this bird is connected with the time that is why a clock symbol is an excellent choice.

Nevertheless, when making a decision to get a rooster tattoo, it is imperative to research all the possible designs and meanings of the tattoo to be sure that you made the right choice.