The Raven is a prominent symbol in folklore. In addition to being the symbol of protection, intelligence, and mystery in Celtic, Roman, and Greek mythologies, the Raven also appears as a culture hero of many of the indigenous peoples of the Pacific Northwest. Even though the Raven stories of each culture are different, specific characteristics of the Raven remain the same. The stories explore the adventures of the Pacific Northwest Raven and its insatiable desire to transform the world. The Raven is a magical creature able to take the form of human, animal, even inanimate objects. The Pacific Northwest Raven is depicted as a selfish, hungry trickster focused on satisfying its own gluttony, whose adventures end up benefiting humankind. 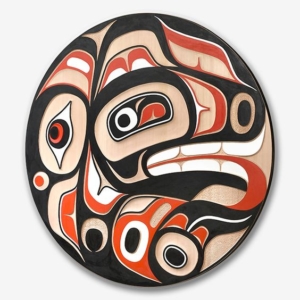 The Raven across First Nations

In the Cahto version of the Raven creation story, the Raven taught by his father creates the world but is unable to give it light or water. Unhappy with the result, Raven decides to travel to a far-off land and steal the light. On its quest, it finds the house of light, wherein it finds a young woman with her father and a child who cries and demands to touch one of the bundles hanging from the walls. It tries to give the bundles to the child, but they float away through the smoke hole. Once they reach the sky, the bundle opens and scatters stars across the sky. Repeating this process, Raven also creates the moon and sunlight. After bringing light to the world, Raven flies out through the smoke hole.

In Tahltan culture, Raven is considered to be the protagonist hero against evil ancestors. Raven was the third child of a woman whose previous two boys were killed by her uncle. The uncle would offer to teach the children to hunt and would take them out on a canoe and push them into the water, leaving them to drown. The third child was Raven and liked carving. The uncle took Raven on a canoe who fell into the water, but instead of drowning, he took one of the toy canoes he had carved and made it grow into full size. He went back to his mother and told her about his uncle’s wrongdoings. The uncle intended to kill Raven again, but once again, Raven escaped with his canoe carvings. He went on a voyage along the seashore, visiting the villages along the way and saving the villagers from evil.

The Inuit are native to the Canadian Arctic and Greenland. The Inuit say that Raven was born out of the darkness and roamed the world. After realizing that it was the Creator of All Life, it flew out of the darkness to a new place called earth and created plants. As he flew around the world, he came across a man who was the first of the Inuit people. Raven fed the man and taught him to cherish nature. Afterward, a woman came to be, and Raven taught them how to build shelter and make canoes to travel the water. Raven also continued caring for and educating their children.

To The Haida, Raven was the Maker of Things, Bringer of Light, and Healer. Many Haida myths and legends often suggest the Raven as a provider to humankind and combine the roles of the creator and the trickster. Before Raven, the world was nothing more than a flood. Raven was bored and hungry, so it decided to fly as the water receded and to find food. It noticed strange sounds coming from a gigantic clamshell. Raven started singing to the clamshell, hoping to calm it with his pleasant sounds. Finally, a small creature came out of the clamshell. This was the first of the First People. Raven also helped to bring the sun, moon, stars, freshwater, and fire to the world.

Amongst the Northern Miwok of what is now Central California, the story of Raven begins with a world covered in water except for a single mountain top where people had gathered during the flooding of the world. As the water receded, the people tried to come down from the mountain, but the land was so soft that those that tried sank. Whenever a person sank, a raven would stand on that spot, and once the ground hardened, the Raven turned into a person.

Tlingit culture stories have two different raven characters, the creator of the world and light, and the childish, greedy, and conniving Raven. The Great Spirit created all things and separated them in cedar boxes. The Great Spirit gifted the boxes to the animals who opened the boxes, creating mountains, water, and seeds for all the plants. One box containing the light was given to Seagull, who refused to open it. Raven became angry and frustrated and stuck a thorn in Seagull’s foot, causing Seagull to drop the box, thus letting out the sun, moon, and stars. Raven continued using such trickery to bring water to the world by putting ash on his tongue to fool the owner of water to believe its thirst. Haida tattoos originated from Native American cultures that reside in both British Columbia and Alaska.

Maybe, as a tattoo symbol or design Pacific Northwest Raven is not something that we encounter on an everyday basis. But despite that fact, this is a symbol with a deep historical meaning with great importance to a lot of cultures around the world. That’s why it is a good thing to know its meanings so we can choose the right design for our next raven tattoo.