Since the beginning of time, we can easily say that nature has always had a way to impact our lives positively or negatively. Nature is very temperamental. We are starting with the winds that offer us the cooling down or the means to tear up a home in a tornado, all the way to fire which can help us heat up or burn things to the ground. This is the particular reason why we worship nature so much. The pure power that nature owns makes us know that we don’t have the control of things. Waves and water are part of nature. Waves are the product of a mixture of things, but they can give us the best memories and stuff like electrical energy if you harness the power. However, waves can also tear down whole cities if they are big enough. In an attempt to exploit and save the power of the wave, lots of people decide to get a wave tattoo on their bodies. This tattoo design is highly symbolic and has a lot of meaning attached to it.  Not only does the wave tattoo represent many qualities, but it also looks great, and it is essential to many cultures around the world. Every person respects the ocean and the waves that it can create, and by getting your wave tattoo, you can show your respect for it.

Wave tattoos are commonly used as a symbol of passion, which makes it a perfect choice for people who want to express how passionate they are about their job, their family, or even life in general. The fact that most people who see this tattoo for the first time don’t recognize this wave tattoo meaning is what makes this tattoo design a very personal one. The owner can include some other designs around the wave to make the definition a bit more clear.

There are several ways in which a high-arching wave can be designed, namely realistically or with simple line work. Images that are designed more realistically have fewer contour lines and more shading, often with the sky in the background to highlight the wave in the foreground. Lots of people decide to get this particular wave tattoo design for its beauty alone, while others choose to get a more realistic wave to give it a bit more life but use the meaning of the other wave tattoos.

Those wave images designed in a more simple style have more definitive lines, moving closer towards illustration. This wave designs are considered to be classic and are naturally admired by people who love simpler tattoo designs. The usage of definitive lines does not influence the meaning of the wave tattoo but instead makes each meaning a bit more subtle.

Smaller waves are designed with less detail and express a tone that is less intense than a design with more intricacy. Once again, this doesn’t mean that the tattoo is less meaningful, but only means that the owner chooses the wave tattoo design that is more simplified.

In most of the designs, the wave is portrayed on its own or accompanied by a horizon scene in the background. Typically, the wave designed on its own is surrounded by other designs, but it is not unusual for people to use a single wave to symbolize something big to them. A wave with a horizon art designs can have further meanings since they bring the wave a bit more to life.

Tattoos that include crashing or arching waves are usually a symbol of rough waters. They can be used to indicate a difficult time that was overcome. People who were able to triumph over some difficult time in life are perfect candidates for this tattoo because the wave matches the feeling that they have during that process. Those are the moments in life when we need a reminder of how strong we can be, and to look at your wave tattoo motif might be just the thing we need.

On the other hand, the image of a crashing wave can simply be used as a symbol of the love we have for the ocean, suitable for surfers, other water sports enthusiasts, or anyone who has found themselves mesmerized by the vast depths of the sea.

These designs are often covered in a thick-lined geometric shape, which adds a sense of conclusion. These tattoos look more like a painting than other wave tattoos and can add more drama to the image. This wave tattoo style is ideal for someone who loves the open ocean and all of the splendor and danger that it brings.

These tattoos are usually larger and used for sleeves and half-sleeves. Koi fish or dragons are often included in this design as well. These 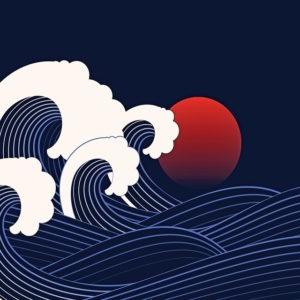 wave tattoos can hold five or more meanings, which is perfect for someone who wants a full illustration of themselves in one tattoo.

Waves are often designed in tribal style, usually due to the correlation between the ocean and Polynesian culture. These images are created with thick links, almost always in black and grey style, and symbolize the relationship between sea and island.

Single lines are frequently used for wave designs. One line completes the whole image, typically including three or four hooked peaks to serve as the arching waves. Watercolor-style ink splotches are occasionally added to these simple tattoos to give it a unique look.

With everything being said previously, we are free to say that there are plenty of wave tattoo meanings and designs to choose from. When it comes to tattoo designs, this is an excellent thing since you can start with one definition and find many others that work for you in the future.