According to one Greek legend, the Amazons were a race of woman warriors with whom various Greek heroes frequently had violent contact. Archeology shows that these fierce women also smoked pot, covered their skin with tattoos, rode horses, fought as hard as the guys and they hated men. 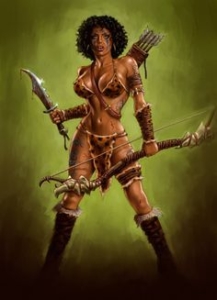 The fierce Amazons were dwelling on the fringes of the known world – they were the mythic archenemies of the ancient Greeks. Heracles and Achilles displayed their valor in duels with Amazon queens, and the Athenians revealed in their victory over a powerful Amazon army. In historical times, Cyrus of Persia, Alexander the Great, as well as the Roman general Pompey tangled with Amazons.

Typically, these warriors were armed with different types of weapons such as a bow, spear, double ax, half-shield, and sometimes a helmet. The Amazons also got a bum rap in antiquity. They wore trousers. They also cut off their breasts in order to fire their bows better. They mutilated or killed their boy children. The Amazons are considered as a hard-core feminist, as well as man-haters, delinquent mothers, and lesbians.

The modern symbolism of the Amazons is thus a direct referent to their strength, as well as courage, independence and also their higher aspirations of sisterhood. It is a surprise that their symbolism has been adopted by lesbians, for all of the reasons mentioned above. The double ax, or the labrys, is the popular symbol of the lesbian community today.

According to a wealth of textual, as well as artistic and archeological evidence, myths and legends, we can see that this ancient warrior woman lived in a truly wild and wonderful world.

The series of Amazonian tribal tattoos feature intricate, interwoven lines, geometric and symmetrical blocks of bright color, and stylized, nature-inspired motifs, including floral elements, leaves, and birds. Also, the tattoo artists opt to honor the beautiful works of art by imitating them in ink—though, out of honor for the spiritual beliefs, as well as the rituals connected with the patterns.