There is a whole world of interpretations and meanings connected with tattoos. We should all spend some time in exploring tattoos with meaning before we commit to a tattoo. There are tattoos that can be a traditional, old school, and fun. There are modern, abstract, realistic, or symbolic tattoos too. The list goes on and on; they can be very different. 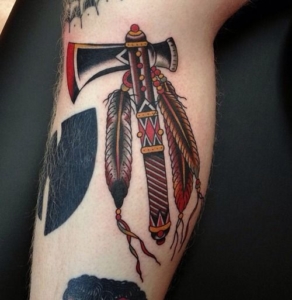 One thing which tattoos have in common is that once they are on our bodies, they will stay there for a very long time. The word tattoo actually comes from a Tahitian word “tatu,” which means to mark something. Tattooing was around for thousands of years. Tattoos had a horrible reputation for many years. However, nowadays, they became more and more acceptable to express ourselves. One of those accepted designs is the ax or ax tattoo.

There are various tattoos all over the world. One such tattoo is the ax tattoo. One of the most important finds from the Viking Age is one of the axes. The people from that period found the axes from the grave at Mammen. The ax is made of iron with silver inlay. The people from then decorated it in the so-called Mammen style. The name comes from the unique find. The style arose in the 900s, and it succeeded in surviving until around 1000. The motifs on the ax may be interpreted as both pagan and Christian.

On one side, you can see a tree motif. It can symbolize the Christian Tree of Life or the pagan tree Yggdrasil. On the other side is the figure of an animal. Maybe this animal is the rooster Gullinkambi or the Phoenix.

According to Norse mythology, Gullinkambi is sitting on top of the tree Yggdrasil. Here, Gullinkambi wakes the Viking warriors every morning, and it will grow at the start of the end of the world. The Phoenix is a Christian mythological animal and the symbol of rebirth.

The ax is a very ancient instrument, probably among the first weapons and the primary tools that humans used. All men, since ancient periods, possessed an ax, and they used it for hunting, self-defense, and woodworking. Nowadays, with heating from fossil fuels, there are new ways and materials for producing axes.

The ax has lost that vital function it once had. This happened when there were even the carpenters who built the ships. The ax was one of the primary weapons for war. Therefore, it is the symbol for the fighter warriors.

In particular, it was dear to the Nordic peoples who made it the symbol of pride. Here, the ax even attributed divine properties as the ax has been the weapon of the thunder god Thor. Thor was the father of the gods to the ancient Scandinavians.

All these features were transferred to the tattoo to symbolize not just courage, but the defense of the community and family. Moreover, it symbolized fatigue and strength, ardor, and sacrifice.

Tattooing an ax must reflect all the characteristics we mentioned before. It will show the features of a strong person, prepared for his defense, and willing to sacrifice him or herself. A strong, tough person that fears nothing, not even death, will wear this tattoo.

We already said that the ax is one of the oldest tools that human beings developed. Since the Neolithic age, it was the symbol of battle and work. All ancient traditions connected it with lightning, water, as well as fertility. They attributed it to the power of making or stopping the rain.

The ax is the symbol of spiritual penetration and fertilization because it opens the ground. The twin-bladed ax is usually connected with the Hindu thunderbolt, so it is the symbol of celestial illumination. The ax has a relation to the ox as of its shape, and it may be a general talisman of strength.

Usually, people consider this design as a symbol of creation. As axes had a close association with thunder, people naturally associated them with rain. The rain was a significant giver of life for them.

Axes were even an essential tool in spreading civilizations. Using the ax to represent the spreading of civilizations may be present in flags too. For instance, the coat-of-arms of the Brazilian municipality of Brusque shows an ax. The people from there added it there to remember the pioneering work of the first settlers and explorers.

The ax is also the symbol of destruction because we can use it as a weapon. This was usually the case with a weapon called a battle-ax. This was definitely an older usage of the symbol because the earliest axes were double-sided stones attached to an end of a piece of wood to serve as a tool.

People often used axes for killing large animals intended as a sacrifice. Some cultures even associated it with sacrifices because of this. This particularly increased when martyrs like Barnabus, Matthias, and Matthew were executed with an ax.