One of the earliest symbols for Christ, the fish symbol, is derived from a Greek acronym for his name and titles. In English, the “Iesous Christos Theou Uios Soter” means “Jesus Christ, God’s Son, Savior.” The initials are ichthus, which is the Greek word for fish. The letters ch and th are each one in Greek. Early Christians have used this symbol as a covert means of identification to escape persecution.

The ichthus is a symbol that consists of two interesting arcs, which are the ends of the right side that extend beyond the meeting point so as to resemble the profile of a fish. The symbol has been adopted by early Christians as a secret symbol, and it is also known as the sign of the fish or the Jesus fish. 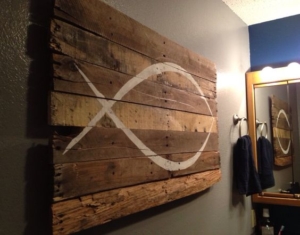 The first appearance of the ichthus symbol was in Christian art and literature, and it dates to the 2nd century AD. The use of the symbol among Christians became popular by the late 2nd century, and its use spread widely in the 3rd and the 4th centuries. The symbolism that this fish carries may have its origins in pre-Christian religious imagery. This fish was also used as a symbol in some other near-eastern religions too, usually as a sacred food. The fish was also considered sacred to the goddess Atargatis, who was said to cause tumors in people that ate them. Fish were only permitted to be eaten by priests at a time of rituals devoted to Atargatis, believing that they represented her body.

In the early Church, the ichthus symbol also held the most sacred significance, and Christians utilized it to recognize churches and some other believers through these symbols as they were persecuted by the Roman Empire.

As we already said, Greeks, as well as Romans, and a lot of other pagans utilized the fish symbol before Christians. Therefore, the fish, unlike the cross, attracted just a little suspicion, which made it a perfect secret symbol for persecuted believers. When they were threatened by Romans in the first centuries after Christ, Christians have utilized the fish mark meeting places and tombs or for distinguishing between friends and foes. As one story from ancient times, when a Christian met a stranger in the road, the Christian sometimes drew one arc of the simple fish outline in the dirt. If the stranger drew the other arc, both the believers knew that they were in good company.

In the 1970s, the Christian fish has been used as an icon of modern Christianity. In 1973, the symbol and message were taken to the Aquarius Rock Festival in Nimbin, Australia.

The importance of this fish symbol in the United States appears to be more decorative than anything else. The American Christians do not fear that they are going to be put to death or imprisoned for their faith, at least not yet, so the symbol stuck to cars or some other objects, as well as used in tattoo art, serves to identify the user as a believer in Jesus Christ.

It is one of the most frequent symbols which can be recognized around the world, and it is also known as Jesus fish. It is believed that the fish symbol is used to represent Jesus as of the numerous times the fish were talked about in the Bible. Moreover, a lot of the disciples of Jesus were known to be fishers. A tattoo of the Christian fish is symbolic of your Christianity and your strong faith in God. If you believe that Jesus has been resurrected from the dead and is the savior of this world, you may like to invest in a tattoo like this.

The Christian fish symbol should be displayed to remind the Christian to be a faithful follower of Jesus Christ, in order to show other Christians that they are not alone, as well as to challenge non-believers to consider the claims of Christianity.

First, a person is not considered Christian simply by spotting this type of tattoo on his body. A person is Christian if he has recognized that he is a sinner, repented of that sinfulness, as well as committed his life to Jesus Christ.

Secondly, remember to look closely at any fish symbol you have noticed in public, as there are some parodies and mockeries of its existence. So, be careful, as some people have simply modeled this symbol to represent their interests.

Critics talking about this symbol either decry it as tacky tokenism or some point out which says that the fish still carries baggage from the days when pagans utilized it as a symbol of fertility or, more particularly, the female reproductive organs.

This tattoo design is utilized by both men and women tattoo lovers.