Tattoo art is the most popular form of body adornment, as it ruled the hearts of millions for centuries. Even nowadays, it continues to be quite popular. Creative tattoo artists constantly work on some modern, as well as realistic designs. However, traditional old school tattoos are still the most commonly preferred among tattoo lovers and enthusiasts all over the world.

Old school tattoos refer to traditional American styles of tattoos. These tattoos feature bold black lines, and the color palette of such tattoos is limited. From the name itself, old school tattoos are traditional tattoos that involve many conventional patterns and designs. Of course, such tattoos are entirely different from present-day tattoos. Usually, they include bold lines and designs.

We can easily identify these tattoos through their colors. Usually, the two principal colors are black and blue. Although these tattoos are conventional ones, we can’t deny that they are still a trend even nowadays. Many tattoo lovers in the world adore having this kind of tattoo when compared to present-day tattoos.

Old school tattoos have their roots in the American interpretation of symbols and traditions which go back thousands of years. They are timeless classics. Such tattoos are the maritime or nautical tattoo designs.

In the past, sailors marked their bodies with tattoos as badges of honor, which marked personal and even professional milestones. Sailors’ lives were full of mysteries and adventures. The lure of the sea brought with it risk, superstition, and grave danger.

Although most of us aren’t sailors, we still navigate stormy seas of life, marking achievements, defying odds, and counting distances. In order to inspire your next tattoo design, takes into consideration the meaning and symbolism of nautical and sailor tattoos. One of the most popular old-school maritime tattoo designs is the homeward bound tattoo. 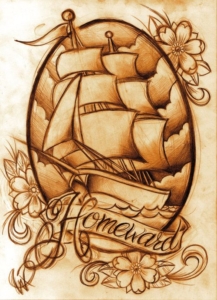 Just like we already mentioned, old school tattoo designs are still famous among tattoo lovers. Their authenticity and uniqueness give them the ability to be a common choice among tattoo enthusiasts. Although they are old school, these tattoo designs are most common among younger people. One reason could be that nowadays, younger people are more attracted to tattoos than adults.

Homeward bound, yet seaward drawn, is one of the most popular old school maritime tattoo designs. Usually, the tattoo has elements such as a clipper ship, which is entirely under sail, water splitting at the prow, almost heading directly at the viewer, with one or two banners which proclaim “Homeward Bound.”

Occasionally, you can substitute some other nautical items, such as an anchor or the steering wheel. However, the clipper ship remains as a traditional image. The ship is most authentically realized with black outlines, bright colors, and heavy shading. These things were typical of the tattoo artwork from those days.

Homeward bound tattoos are a real tattoo classic, originating from the early days of maritime tattooing. The ‘homeward bound yet seaward drawn’ was the common sight on sailors in the early 20th century. Featuring the clipper ship entirely under the sea and tearing across the ocean, this design is finished with a bold banner saying “Homeward Bound.”

As we already said, some other maritime images can replace the ship. However, the clipper takes center stage of any traditional homeward bound tattoo. For those people that love old school maritime tattoos, this would be an excellent design for them.

Just like we said, this tattoo design is the most recognizable of all maritime, as well as nautical tattoos. There is maybe no tattoo design, which has a greater association with sailors and seaman than this one. Sometimes, you can incorporate seabirds and clouds in the background of the ship in this design.

Usually, these tattoos are large, and they take the place of pride on the chest or back of a sailor. However, there are some smaller versions which are more common on shoulders and arms.

When the placement of this tattoo is on the back or chest, it is usually framed in rope, and underneath the ship, there is a scroll with the words “Homeward Bound.” Sometimes, these two words are at the top of the picture. The tattoo is usually the symbol of pride for the way of life. Moreover, it can be an amulet to make sure that a sailor is going to return home safely.

Also, remember that no matter the specific meanings that this tattoo design may have, you can always have your meaning. Your tattoo can symbolize whatever you want, as it is your own choice.

Lizards are fascinating animals. There are around 6,000 different lizard species