Home
Blog
Tattoos In The Workplace: Is Body Art A Workplace Problem?

For a long time, tattoos have been considered as part of the counterculture. A lot of people connected with gangs, bikers, as well as other groups, which were thought to operate outside of the social center. Nowadays, tattoos gained some wider social acceptance, and a lot of people, men and women alike, have them. People who have tattoos work in different industries, and they also hold entry-level jobs and top executive positions. So, what is an employer to do, and is his body art a workplace problem? Does having a visible tattoo say something about a person who is relevant to his job?

In the global market of today, employers take more seriously the necessity of providing a workplace environment that welcomes employees from a lot of different backgrounds. The competition to attract, as well as retain skilled workers, resulted in corporate cultures that strive to demonstrate the value which is placed on individual and group contributions. Also, there is increasing attention which is paid on offering a company culture and benefits package, which supports a variety of lifestyles. Should a person with a visible tattoo be treated any differently?

Depending on where and what the tattoo means, there can be or cannot be a problem for employers. Some laws still support employer dress code/appearance policies generally, and employers retain some flexibility in creating the rules which require the employees to present themselves in a way that is consistent with the image of the employer. In different cases, it can still violate the law. 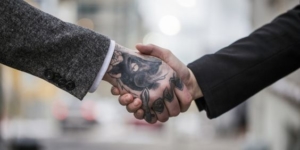 A lot of employers have policies that do not permit visible tattoos. Depending on the industry of the employer or the type of job, this can make sense. For instance, the odds are that a four-star hotel may not want the concierge to have some large tattoos of skulls and crossbones on his back or each hand. However, the same hotel may have less concern if a dishwasher in the kitchen has such tattoos as direct contact with the customers of the hotel is minimal. From a business point of view, the problem for the hotel is to write a policy that draws appropriate lines between jobs in which visible tattoos can or cannot be appropriate.

This is probably a simple example. It can get more complicated if the employer is not thoughtful. For instance, what if a bank employs a valued administrative assistant that never has some contact with customers? Also, his workplace is located in the corporate headquarters, and his interactions are strictly internal. So, is it going to be okay if that person arrives at work one day and has a star tattooed under his ear? The answer is that it depends on the corporate culture and the general attitude of the bank towards tattoos. However, it also depends on the difficulty in recruiting, as well as retaining good administrative assistants.

The odds also are that while the bank may not appreciate a facial tattoo, it is probably not worth the chance to lose a good employee or not having the ability to retain a new one as it has a policy that is going to prohibit the tattoo. On the other side, the bank may be more concerned about a teller with the same tattoo that regularly interacts with the customers of the bank. In such a situation, a policy that prohibits the tattoo can be understandable.

Policies that prohibit tattoos should not reflect value judgments about tattoos or the people that get them. A lot of employers would probably be surprised to find out how many of their current employees have tattoos, and they simply cover them when they are at their workplace. So, the negative assumptions about what tattoos say about the person that has them are usually misplaced.

The problems which are raised by tattoos can get more complicated when it comes to gender and religion too. Employers have to be conscious of such problems before they write and enforce policies that prohibit visible tattoos at their workplace .

Religious tattoos can pose a lot more challenging questions. For example, what if an employee that works directly with customers has a tattoo around his wrist, and the company has a policy that prohibits visible tattoos in customer service positions? Will it be okay to require the employee to wear sleeves that are long enough to cover that tattoo? Well, it depends. If the tattoo is just a part of a sincerely held religious practice or belief, and that practices or beliefs prohibit the employee from covering the tattoo up, the employer may need to permit an exception to the ‘no visible tattoo’ policy. In such situations, it will be good to ask the employee about the tattoo and discover whether there is some religious basis for it, which prohibits them from covering it.

The key for employers would be to have a written policy that says that the employees are required to read, as well as sign, and then enforce that policy consistently. In that way, employees will not have the ability to claim that the policy was different from them. Also, policies should be based on a sound judgment that is in the best interest of the business. That means that employee and customer interest also have to be considered before the policy is drafted.