There are various types of tattoos that you can choose from, and such tattoos are Egyptian writing tattoos. These tattoos are made from various symbols, and they also take various meanings. Egyptian writing tattoos are among the original concepts of these designs. Egyptian symbols are designed out of some vital images of these people. A lot of years ago, the tattoos weren’t finding their uses only for fashion, like nowadays. The original history of tattooing started, and people had some specific symbols drawn on their skin. Ladies were the most common people that applied tattoos during the ancient Egyptian times. This was because tattoos had a specific role. The designs of the ancient tattoos were quite similar to the traditional, Western Asian, and North African cultures. 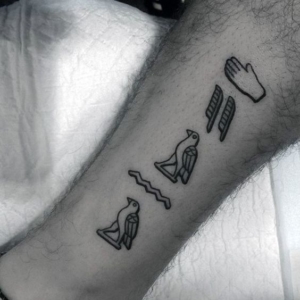 These tattoos also had different meanings with them as well. In ancient Egypt, women were wearing tattoos for various reasons. Some applied them as the mark of the prostitutes, or they also helped to protect the woman from STDs.

However, they were also wearing them as signs of spiritual connection. They were some kind of amulet when women had difficulties when delivering a baby. The placement of such tattoos was around the abdomen, on the breasts, or on the top of the thighs. When the woman is pregnant, the pattern stretches in a way of protecting her.

Egyptian writing tattoos are also among the first tattoos that ever appeared in the world. One common Egyptian tattoo design is hieroglyphs. Hieroglyphs play an important role in the tradition and culture of Egypt. Below, we are going to talk about hieroglyphic tattoos, their meanings, and symbolism.

The Egyptians invented this pictorial script. The appearance of these distinctive figures in 3000 BCE marked the start of the Egyptian civilization. Although based on images, Egyptian script was quite more than a sophisticated form of picture-writing.

Writing hieroglyphs required artistic skills, limiting the number chosen to learn it. Only the ones privileged with an extensive education had the ability to read and write hieroglyphs. Such people were the Pharaoh, priests, and nobility. Others used simpler ‘joined-up’ versions: hieratic and demotic script.

Hieroglyphs are a design choice for tattoos since the time of the ancient Egyptians. There are actually statues of Egyptian kings of the New Kingdom that show what is probably hieroglyph tattooing.

Just like we already said, hieroglyphs are a system of pictorial writing. While the word “hieroglyph” was originally used to refer to the ancient Egyptian writing, it has also come to be applied to pictorial writing systems in other parts of the world too. This includes the Maya people of Central America. A lot of specific Egyptian hieroglyphs find their uses in tattoos, such as the Eye of Horus, and Ankh. Some of them are more extensive, spelling out names, and sometimes whole phrases like blessings.

Many other symbols have found their way into the tattooing world, such as seated gods, magical instruments, and sacred animals. These tattoo designs are actually intriguing ones that garner second glances from people who wonder about their meanings.

There are many ways to express yourself with the ancient Egyptian system of writing. For example, you can use from logogram or phonetic interpretations, adding color, and deciding from which direction the tattoos should be read. You can integrate symbols into some larger tattoos, and there are numerous possibilities.

For example, the Ankh is the symbol of breath of life. It is simply one of the many Egyptian tattoos available. The real meaning of this symbol isn’t apparently known as the Egyptologists state. However, occultists, for example, explain the beautiful meaning behind this symbol. According to them, the vertical line of this sign has a relation with being spiritual, while the horizontal connotes the world outside.

There are various reasons to select a hieroglyphic tattoo and just as many choices. Eternal good fortune, potency, and protection are just several of the promises that the hieroglyphs of Egypt carry. Sacred buildings and tombs were also usually adorned with extensive curses and blessings.

Many people prefer tattooing singular symbols, like the scarab, while others take larger parts of their bodies to tattoo hieroglyphic texts. Many hieroglyphs, like the sun, denote the passing of time. However, others, like the Ankh, represent eternal life. Some hieroglyphs, which are not that famous, are truly worthy of resurrection too.

We are sure that every person would like to carry some powerful messages on their skin, expressed with hieroglyphs.