A lot of symbols from ancient Egypt find their uses in tattoo art. That’s mostly because of their interesting and amazing designs and also because of their meaning and symbolism. One such symbol is the Eye of Horus, which is also known as Wadjet or udjat.

The Eye of Horus is the ancient Egyptian symbol that symbolizes protection, good health, and royal power. The Eye of Horus is quite similar to the Eye of Ra, which belongs to another different god, called Ra, but represents almost the same concepts. 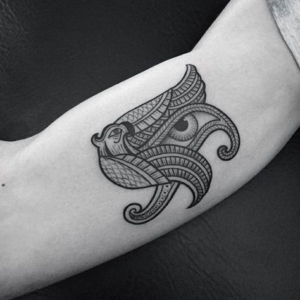 Funerary amulets usually had the shape of the Eye of Horus. The Eye of Horus is the central element of seven faience, gold, carnelian, as well as lapis lazuli bracelets, which the mummy of Shoshenq II had. The wedjat has been intended to protect the pharaoh in the afterlife, as well as to ward off evil. Ancient Egyptians, as well as Middle-Eastern sailors, would frequently paint this symbol on the bow of their vessel in order to ensure secure sea travel.

Horus has been the ancient Egyptian sky god that was often depicted as a falcon, most likely a lanner or peregrine falcon. His right eye has its association with the sun god Ra. The eye symbol represents the marking around the eye of the falcon, also including the teardrop marking usually found below the eye. The mirror image, or also the left eye, was sometimes the representation of the moon and also the god Djehuti. The Greeks, as well as Romans, believed that an evil heart might get to the eye. The thought to be powerful effects of eyes, as well as optics even created the myth that the energy-producing power of the eye could cast evil spells with only a glance. As the ancients believed, the evil eye could also be counteracted with a ‘good eye’ myths about Horus arose.

According to one myth, when Horus and Set were fighting for the throne after the death of Osiris, Set has gouged out the left eye of Horus. Either Hathor or Thoth has restored most of the eye. When the recovery of the eye of Horus happened, he offered it to his father, hoping to restore his life. Therefore, the eye of Horus has been utilized to symbolize sacrifice, restoration, healing, as well as protection.

After the ankh symbol, the icon commonly known as the Eye of Horus is the next most well-known one. It consists of a stylized eye, as well as an eyebrow. Two lines also extend from the bottom of the eye, probably to mimic the facial markings on a falcon to Egypt, as the symbol of Horus was a falcon. In ancient Egypt, the Eye of Horus was a quite powerful symbol, as well as a protective amulet. As the regenerated eye of the falcon god Horus, people wore this talisman as a sacred symbol in order to ensure good health.

Among the modern tattoos which utilize such motifs from ancient Egyptian times, the Eye of Horus is actually the one which is almost at the top, together with the ankh.

Nowadays, people ascribe a lot of meanings to this design, including protection, revelation, as well as wisdom. It often has its connection with the Eye of Providence which is found on US $1 bills and in Freemasonry iconography. But, it is also problematic to compare the meanings of these symbols beyond viewers being under the watchful eye of the superior power. This Egyptian symbol is usually utilized by some occultists, which include Thelemites, who consider 1904 the start of the Age of Horus. The eye is usually within a triangle, and its interpretation is as the symbol of elemental fire.

Conspiracy theorists usually see the Eye of Horus, the Eye of Providence, as well as other eye symbols as all ultimately having the same symbol. This is a symbol of subjugation, illusion, control of knowledge, manipulation, as well as power. The Eye of Horus is intimately connected with the gods, as well as their rule over the realm of men. Part of the rule involved protection, and this symbol was also the one that represented protection too.

According to some saying, the Egyptian sailors painted this symbol on the bows of their boats before they set sail on long, as well as perilous voyages. In tattoo art, the Eye of Horus is definitely one of the most important and common symbols from ancient Egypt, and it will usually stand as a tattoo on itself, but it can also stand in combinations with other symbols, in order to have a richer, as well as more beautiful significance and meaning.

Just like we already mentioned, this Egyptian symbol usually symbolizes divine protection, good health, and royal power, and that’s why it is a favorite motif among tattoo lovers.