There are lots of people, who when it comes to tattoos, want a unique one that reveals to other people a lot about who they are as humans in only a couple of words. If you consider yourself as this kind of person, then you should know that the ambigram tattoo is just the one you were looking for. This is because ambigram designs not only tell one thing about their owners but two or more elements in a single text tattoo.

An ambigram tattoo represents an entirely symmetrical design that reads as the same word, or two different words when turned upside down. These letters in the ambigram are designed in such a way that gives any word that is part of the tattoo a good, natural look without muddling up the opposite side of the design. Several ambigram tattoos designs are considered as classical designs since they have been used by lots of people, and other designs that are created according to the preferences of the people who are going to wear the tattoo.

Most of the ambigram designs feature the sweeping swirls of a calligraphy-style font, including complexity to the image. This doesn’t mean that you need a unique technique to make this calligraphy style work in tattoos, but only that it adds an interesting effect that attracts attention. However, the mere knowledge of how to write in causative is not enough to be able to make one of these designs, but you need a lot of practice and one or more words in mind for an ambigram tattoo. Only then there’s a real chance that you can create an ambigram design on your own.

Because the design includes a word that can be read from different sides, the symbol stands for both eternity and fidelity. This is a very cool meaning that most people are not even aware that comes along with the ambigram tattoo when they get one. This is the particular reason why so many people decide to get this kind of design as matching tattoos or couples tattoos.

Choice of words to be included in an ambigram tattoo

When it comes to an ambigram tattoo, the choice of what to include is genuinely limitless. This is because not only any word or words can be used, but also short phrase like “carpe diem,” “always in my heart,” can work great. This is the crucial reason why a lot of people decide to get an ambigram tattoo. Unlike most other tattoo designs that incorporate symbols or images, these designs can end up meaning entirely anything you want them to, and they can be any words that make sense or hold some meaning for you.

This is a great tattoo since you can turn almost any word into an ambigram if you want to emphasize its significance. Even though you have so much flexibility while creating this tattoo, this also means that you need to spend more time in the process of deciding what you want to be included in your ambigram. The best thing is to have a previous idea, but with a little thinking, you can come up with a great one that does a great job of defining who you are.

“Family” is one of the best choices for an ambigram tattoo, especially if you want to emphasize the bond between family members. Another cool thing about the family ambigram is that it can be done in all lowercase letters, or you can even capitalize the “F” for a more stylish look. Without a doubt, this is one of those ambigram tattoos that every person can find some meaning in.

Another popular choice for an ambigram is “dream” because of its nostalgic appearance when rendered in swooping calligraphy. The connotations of the word are also attractive as it brings to mind desires, chances, and wonder. Some people decide to further embellish this design by combining it with clouds or other dream-like images around the words to make it more attractive. That entirely depends on the wishes of the owner.

When it comes to ambigrams, they can also be designed in a way that the text can be read differently from each perspective. In this way, there are two words included in the design, making it even more meaningful. These kinds of ambigrams can be a bit harder to design than the words that read the same in each perspective, but multiple words give you even more ways to depict what’s important to you.

“Faith” and “Hope” are the perfect combination of words that create a duality of positive statements, which depending on the owner, may or may not have a religious connotation. “Faith” is often related to a belief in God, in many forms, and is improved by the idea of “Hope” of those beliefs. This is one of those unique religious tattoos that are perfect for anyone who is not interested in getting one of the cliché religious symbols or verses.

“Strength” and “Courage” are other influential pairing, that can serve as a reminder of carrying the virtues throughout one’s daily life. If you take pride in being the rock of your group, then this ambigram tattoo is the one for you, or you might even get it as a memorial tattoo. These are very popular words when it comes to military tattoos. You can get the ambigram as a single tattoo in this case, or you can combine it with a larger military tattoo design.

There are lots of other words that are used to create duality and opposition within the design. For instance, word pairings like “Life” and “Death” or “Love” and “Hate” are frequently used because of the strong and confrontational element created. This is an ideal way to prove that you acknowledge your strengths and your faults and that you look at things realistically. 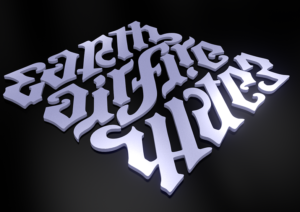 The opposition of the two words raises the spectrum that exists between the terms, inviting ideas about their importance. This is the particular reason why it is so important that people take their time while choosing multiple words to include in an ambigram tattoo. You want to be sure that both words are equally important and mirror who you are as a person.

“Love” and “Pain” represent heartbreak and the consequences of relationships but, at the same time, the joy of the experience. Any person who has gone through one or more painful breakups in their lives while also recognizing the value in those relationships might discover that this is the perfect ambigram tattoo for them. This is one of those types of designs that whenever outsiders look at, they immediately feel a little bit more connected to you because most people are familiar with those two emotions in relationships.

Another two words that demonstrate the connection in the duality, as well as the good and bad qualities that exist in humanity, are “Saint” and “Sinner.” Once more, this is a brilliant way to show your understanding of what it is to be human. This tattoo can also be seen as another religious tattoo. However, this is a kind of tattoo that is perfect for anyone who wants to get an ambigram tattoo that represents the good and bad sides of all people.

This kind of ambigram involves rotating a word or phrase at a certain fixed degree. There are certain individual words that, when rotated, may give a different meaning from the original meaning. One of the universal examples is the word down. The shorter version of the word town as “dn.” If you rotate this word for 1800 degrees, it will read as “up.” To create such a tattoo, people need to be very creative.

These kinds of ambigram entail a word that, when reflected on a mirror, can mean the opposed to the original meaning. When it comes to tattoos, these ambigrams are usually done on both arms.

This is another good looking tattoo. It is made up of interlinked words that form a chain. As a tattoo design, chain ambigrams are depicted as a diamond or a circle.

This kind of ambigram tattoo consists of a word where the spaces between letters create another word. These tattoos require a skillful tattoo artist who is creative enough to style letters so that their spaces form a word that has got a meaning.

Nowadays, 3D tattoos are really popular among tattoo enthusiasts. The main reason for that is because the 3D effect looks great on the skin. A 3D Ambigram tattoo includes words that are done in 3D and, when viewed from different angles, form a different word.

After you choose the right word or words to include in your ambigram tattoo, the next thing you should do is decide about the size of the tattoo. Some larger ambigrams consist of several words that can be used to form square or diamond shape out of the terms. There are even some ambigrams that utilize the four elements, creating a striking design that is more complex and intricate. “Loyalty,” “Honesty,” and “Respect” are examples of a larger ambigram that marvelously dictates one’s most exceptional personal values.

After you decide the size, the next thing you should do is finding an ambigram tattoo and design it, so it looks great on your skin. Having in mind the choice of words or words that are going to be used in your tattoo, you’ll want to create multiple designs to choose from to make sure that you end up with the best possible look. It is not recommended for you to select the first ambigram tattoo that you have seen, because very often people regret choosing this tattoo. As an alternative, you should take a few weeks to research and design multiple ambigram tattoos and then choose your favorite one.

Most often, ambigram tattoos are inked on the forearm so that a person can flip it in one way or the other to get the full effect of the ambigram design. However, some people still place the tattoo in different locations like on the leg, but its influence and impact may not be so visible.

Besides the fact that ambigram tattoos are not as trendy as other text tattoos, nowadays, there is a growth in the popularity of these tattoos because they allow people to say a lot about themselves by having a tattoo that doesn’t take up too much space on their bodies. Its a cool and unusual tattoo design that can provide some mystery in creating the right design. If you have one or two words that can represent who you are as a person in the greatest possible way, then you should consider getting an ambigram for your next tattoo.