Today, space and those things associated have been making a big flashy comeback. Scientists like Neil deGrasse Tyson are making all this space info a lot more acceptable and making it more fun to learn about. Therefore, kids today are getting involved in subjects involving space and astronauts at an earlier age. 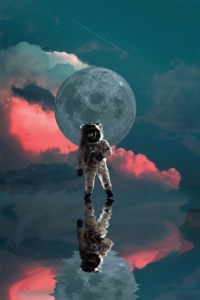 Space is the most grandiose part of our universe. How many secrets are there, and how much mystery. A man or woman who explores space is called an astronaut. The first astronaut was Yuri Gagarin, whose name is well known all around the globe. We are all proud of him; many even make tattoos devoted to this dangerous profession.

Doing the universe in watercolor style is always a magical and brilliant option, but tattooing it in black & grey is super interesting when done properly. Both styles are great and send meaningful messages equally. People with various interests wear astronaut tattoos. One, for example, and my favorite reason, is the symbolic meaning of space exploration and childhood dreams. We are eager to look beyond the galaxies and stars, reach for them, or push even further. We dream of glory, yet only a few are wilful and determined to persevere until the dreams become a reality.

Of course, astronauts themselves have a pretty good reason to get an astronaut tattoo too. Great science fiction lovers relate with the planets, stars, galaxies, reminding them of their favorite legends and stories. “Aiming for the stars” is a straightforward explanation for astronaut tattoos. However, Americans see astronauts as symbols of freedom, as they’ve gained significant recognition for their accomplishments in space during the 20th century.

Coming from ancient Greek, the word “astronaut” means a sailor and a universe. Who hasn’t thought about having an astronaut tattoo? These people have given us a glimpse into the unknown, they risk their lives to go into space, and they come back with fantastic tales of what they have seen and done.

Let’s go with the apparent astronaut tattoo design meaning. If our “spaceman” has been to space and wants to get a tattoo, it just makes sense that they would like to get an Astronaut type of tattoo, right? In many cases, they might get a design of themselves in their spacesuit or even get a unique astronaut tattoo design. You might also see a NASA-related tattoo with an astronaut.

Another pretty obvious astronaut tattoo design meaning has to do with when someone wants to become an astronaut. They are the sort of people who have kept that childhood dream alive and want to tell the story. They have thought about landing on the moon or just leaving orbit, and they want to encapsulate those images on their bodies. In other words, these could be admirers of space, galaxies, and astronauts and want to support the space program and men and women who explore space by getting an astronaut tattoo design.

Anybody who loves space might decide to get an astronaut tattoo rather than just getting stars, planets, and galaxies. These designs can range from just being an astronaut on the moon, or the “spaceman” could be a part of a larger tattoo design. Nevertheless, the owner is trying to send the message that they adore the idea of floating around in space like a real astronaut.

Many Americans see astronauts as elements of freedom, so they will get this tattoo design to show their loyalty and patriotism. The US of America has gotten a lot of respect from worldwide for countless things, but the space program was one of the biggest ones during the last century. These tattoos will usually include an astronaut and a flag on the moon. There are plenty of different choices when using this meaning, but the owners and artists usually choose one that can be a continuous source of motivation and inspiration.

A slightly rarer design meaning has to do with sci-fi. Since so many interesting things having to do with sci-fi happen in space, it’s no surprise that sci-fi enthusiasts would get an astronaut tattoo for this reason. These tattoos can range from a simple astronaut design to a more extravagant design with galaxies, planets, moons, and other elements.

Types Of People With Astronaut Tattoo

People who have such a tattoo design are very quiet and calm. However, it does not stop them from being committed and courageous. They are constantly ready to step up and help somebody or even to save somebody’s life. They also love to travel around the world, explore something new and interesting. These people are excited to explore themselves. They are always interested in science because it is a great chance to discover something new.

Astronaut tattoos are perfect for people having deep passions for space, flying, and above all, those who dream of reaching space. These designs will make you think of your youth dreams, aiming high for outer space and many more. These tattoos are also a terrific option for any Space fan or astronaut fan.

Astronauts are usually very smart, and they wear very cool gear, and, you know, they get to leave the planet Earth! Also, most of these tattoos come with additional meanings, and they come in a bunch of cool designs.

There are many choices for space-based tattoos. It can be an astronaut, or just a portrait, for example, a portrait of Yuri Gagarin or Neil Armstrong. They can be as black as full color.

There are many variations of these tattoos. However, these tattoo designs have a connection to space and rockets, so you might see some of these incorporated. There are many important moments in space exploration in which an astronaut accomplished something that the “earthlings” will remember. Artists can also turn these specific moments into meaningful astronaut tattoos. You might see admirers of space and space exploration with some of these tattoos. Below are a few interesting examples of what we’ve seen.

He’s the first American astronaut in space (1961). He was the second “spaceman” ever to enter space overall. He took a space trip that lasted a total of 15 minutes.

The first American woman to go with Space Shuttle Challenger into space on June 18, 1983. She is a perfect symbol for women breaking through barriers and doing something most men had never done.

He was the first astronaut ever to conduct what we know as a spacewalk. He’s also known as an extravehicular activity on March 18, 1965. This took place on the Voskhod 2 mission for the USSR. This was followed up by American astronaut, Ed White who did his spacewalk on NASA’s mission called Gemini 4.

-Astronaut on the moon

-Universe Tattoo with the astronaut

When you see this kind of tattoo design with the universe in the background, it might help you understand the enormousness of space and how small and insignificant we are in comparison. The saying is that people are a tiny bit of sand in comparison to our know universe. This design might remind someone about how small we are. This might be a reminder of knowing your difficulties and problems aren’t as big as you think they are.

Along with the astronaut, you can also make other tattoos connected to the vast space. Like a planet, for example. The meaning of such a design depends on which planet is depicted. The sun and Earth are also good choices.

As you can see, there is a number of reasons why someone would like to get an astronaut tattoo. Spacesuits look great on paper and the skin. They can look fantastic both in color and in black and white. The space race might not be as appealing as it once was, but it seems like the astronaut art designs continue to get more and more popular.

Whatever your reason for getting this tattoo, it is apparent you can go in many different directions. Many astronauts led the way for everyone now that would be great candidates for a tattoo or just general astronaut designs with other meaningful ideas attached to them. The basic point is that you should get a design with great symbolism that makes you happy.