Sun tattoos are very powerful, as well as quite popular tattoo designs, and they are usually worn by both men and women. The Sun is very necessary for our everyday lives as we cannot live without light and food. It plays an essential role in our growth and life cycle. The Sun is the basis of all living things on this planet. One specific type of tattoo is the Celtic Sun tattoo, which is quite popular, and it’s considered a symbol of healing, fertility, and hope of life.

Being the source of energy and light for life on Earth, it was also a central object in culture and religion since prehistory. It is considered as the symbol of power, strength, as well as health, energy, and light. Those people who wear Sun tattoos believe that it gives a view to guide them through some dark times. 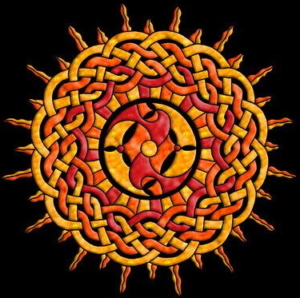 However, the Celtic Sun is a combination of two traditions. The circular sun, with rays, is a universal symbol for cultures all over the Earth. In contrast, the circular Pictish circle or Celtic knotwork, which occupies the center of the Sun, is the other tradition. As the tattoos using Sun symbolism and Celtic knotwork are both popular, the melding of such symbols in the tattoo is a natural progression.

In Celtic mythology, the Sun was usually associated with some gods, and from that time, it was worshiped as a god too. These tattoos are symbols of heat, medicine, as well as healing.

“Three things cannot be long hidden: the sun, the moon, and the truth.” Buddha

The Sun is the ultimate life-giver, maintaining the life of plants, animals, as well as humans spanning the Earth. It is responsible for the uniqueness of our planet in the vast reaches of the solar system. From the dawn of humankind, people were fascinated with the Sun, and it is a symbol that is common throughout all historical cultures. For this reason, not just the Celtic Sun tattoo, but Sun tattoos, in general, are a hugely popular choice for tattoo designs.