The chess game is extremely old, so naturally, there is a lot of meaning, symbolism, and history attached to this tattoo design. The meaning of this tattoo design depends on the person with the tattoo and which chess piece you choose. People do not always get this tattoo because of the game but for the symbolism.

In the past, it was believed that the game of chess was created in Eastern India. During that time, the game was called chaturanga, which meant ‘four divisions,’ carrying a reference to the military divisions of elephants, cavalry, infantry, and chariots. These sections stand for the current versions of today’s bishop, knight, pawn, and knights.

From Eastern India, this game was spread the Far East and west on the Silk Road. Around 600 years, there was evidence of the existence of the game of chess by Sassanid Persia. In this area, it was known as chatrang. At this time, the Muslim world began playing the game and renamed it shatranj. Even though the game received different names based on where it was being played, but eventually ended up being known as chess in Europe.

There are different variations of this tattoo, from the board to all the pieces. Below are some ideas for a chess tattoo with their meanings.

The most important piece on the board is the king due to the fact that if you lose the king, you lose the game. According to that, this is a strong piece and carries much meaning to those who have the king chess piece tattoo. There are some people who, through the king tattooed on their body, want to reveal to people their importance. His is because the king is such a dominant piece in the game of chess, and naturally carries the same meaning in life. Even if in the game of chess, the king can’t move far, he doesn’t even have to since he has soldiers to do that for him. By having this tattoo, you’re letting the world know that you are the man or woman, and you change things.

The Queen is another powerful piece that commands the soldiers on the board. In the game, the Queen is the most powerful attacker and can move almost anywhere she wants. Due to her strength on the battlefield, she is also carrying the responsibility of attacking too much. When she “dies,” the game is lost. The meaning of this tattoo is that every man needs a woman beside him.

The knight piece has a unique set of skills. It may not be the most powerful, but it has a very distinct skill. Those wearing the knight chess piece tattoo know they are good at things. The knight can represent Divine Law, which means that we must take all our actions into account. The knight in the game moves in ‘L’ and is the only piece in the game that can leap over others.

The rook represents the protector of the more important pieces. This piece can move linear left and right or back and forth. In real life, people with this tattoo are known as great soldiers and are very loyal.

The pawn tattoo represents the first step or the beginning of the road. These are warriors that come to battle before the others. The only movement they can make is one step forward or diagonally if they are going to conquer and enemy. The pawns are sacrificial for the greater good. People decide to get a pawn tattoo to remember to take things one step at a time and not to rush the process. 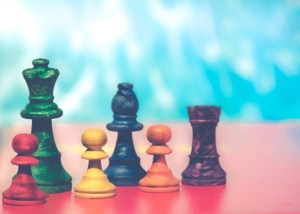 The king and queen matching couple tattoo might symbolize something completely different than that of the pieces. There are many couples who decide to get one of these tattoos. These people are the rulers of their own domain and nobody can tell them what to do. The king and queen put all distractions aside and focus on each other. It is a strong relationship that can stand the test of time. On the other hand, you could look at these individually and make your assumptions about meaning.

There is a whole range of meanings that people can attach to their chess tattoos, and there is usually a wide range of meanings for the people that wear these tattoos. Everything depends on the person who chose to get this tattoo.