Home
Tattoo Meanings
Chrysanthemum In Europe And In Japan: Then And Now

If you love flowers, then you should take a look at this one. The chrysanthemum was first exhibited in England in the late 18th century, and it has acquired differing symbolism throughout Europe. The word chrysanthemum originates from the Greek language or words, which mean golden flower. Still, one German legend refers to two white chrysanthemums that materialized in the guise of an old man in front of the home of a low-income family that had sheltered the Christ Child. In Italy, the particular connection of the chrysanthemum with the dead makes it acceptable only for funerals.

The chrysanthemum is one of the most mystical florets, and its season is autumn, with some highly visible yellow tints of autumns gardens and parks. The numerous ordered petals were also associated with Sun symbolism and with longevity. Even though chrysanthemums generally denote cheerfulness and rest, some of the individual colors which they have can carry some specific messages: red for love, good luck, as well as best wishes, white for truth, and yellow for slighted love. This floret regularly occupies a leading position in tattoo art as of its loveliness, as well as enchantment.

This is a flower that comes from China, and it was cultivated over 2,700 hundred years ago, and it was later brought to Japan by Buddhist monks in C.E. 400. It is a symbol of beauty, and it was utilized as a medicinal herb. A lot of people believed that this herb is a powerful symbol of life and can replenish it. Also, it was said that a lot of people even utilized the boiled root for headaches, and the sprouts used in salads, as well as even brewed the leaves for a special drink. 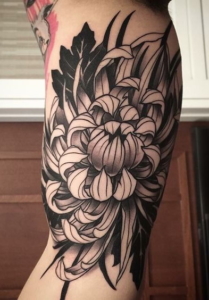 If you want to be happy your whole life, you should grow chrysanthemums or sometimes also called mums. In China, this flower was the symbol of Taoist simplicity. Autumn is the season of this flower, as it is a time of tranquility, abundance, as well as completeness. As it blooms into winter, it may also be a symbol of the ability to mediate between life and death, Earth, and Heaven.

Its ornament started as a famous one on the body in ancient times. The soldiers, as well as smiths, applied this tattoo on their shoulder blade or shoulder, which personified the bravery, as well as the fidelity of warriors or skills and the pursuit of excellence of blacksmiths.

In Japan, this flower was considered sacred only some representatives of the imperial family were permitted to wear clothing and jewelry with their images.

In China, as we already mentioned, is the Taoist symbol of self-protection, tranquility, and abundance of autumn. In Vietnam, this flower is added to the sign of cleanliness of mind and soul, the spirit of enlightenment, as well as interconnection with the environment.

In some lands in Europe, the chrysanthemums are mourning blossoms that decorate the graves and cemeteries. More usually, a wreath is made of white flowers. In Italy, for example, it is a symbol of sadness and unrequited love or broken relationships too.

The chrysanthemum blossom usually possesses plenty of different meanings and connotations, among which the most well-known are the following:

The different peculiarities of Japanese tattoos are a huge size, colorful landscape, as well as the elegance of line. Each of the elements of the overall composition has a definite message and characterizes its owner. In Japan, these sacramental flowers symbolize the largesse and grandeur of human.

Additionally, for a long time, they were connected with Japanese royalty, where the emperor sat on a chrysanthemum throne. They utilized it for medicinal purposes, where its petal was placed at the bottom of a wine glass and encouraged long, as well as healthy life.

In Japan, too, this flower is the symbol of the Sun, and its ornament is an indicator of glory, courage, as well as valor.

This is a tattoo that represents the traditional Japanese symbols: a beautiful red chrysanthemum, as well as a big dragon with an interesting turquoise coloring, which is a sign of magic, loyalty, as well as the ability to go beyond the ordinary. The pattern is also placed on the half sleeve, and it looks great on the strong body of a man.

In tattoo art, this flower also symbolizes steadfastness, as well as determination.

As these flowers have a lot of history, they are often chosen as a motif in tattoo art. The chrysanthemum is one of the most cultivated ones in the whole world. They are so popular that they reign very high, being the most purchased flowers for gardening. Despite that, they are a common tattoo design as of its colors, which signify different things.

Nowadays, this flower symbolizes courage, determination, as well as longevity. Also, it is the emblem and unofficial sign of Japan.