The Disney Castle or Cinderella Castle is the famous icon of the Walt Disney Company. It is the main symbol in all film title cards and the focal point of the theme parks. Disney movies and theme parks are famous and loved all over the world. They hold a significant nostalgic meaning. With this in mind, it’s no surprise that Disney fans decide to get the Disney castle tattoo. It is the most important symbol for fans, and when someone sees this tattoo, the meaning is evident. 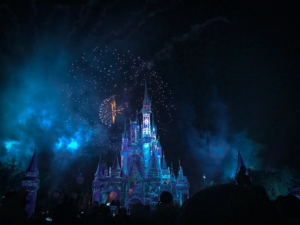 October 1923 is the time when Walt Disney Company first appeared. It all started with the creation of the short film Alice’s Wonderland by animator Walt Disney. The film is written based on the 1865 novel written by Lewis Carroll. The first name was Disney Brothers Cartoon Studio, accompanied by co-founder and brother of Walt, Roy Disney. The cartoon catalog was extended in 1928 when Walt created the short Steamboat Willie. The cartoon features the future Disney icon – initially Mortimer and ultimately changed to the well-known and beloved – Mickey Mouse. The show was an immediate hit since it was the first cartoon with synchronized sound. After that, Walt improved the Mickey Mouse world by adding characters like Minnie Mouse, Donald Duck, Goofy, and Pluto.

In 1937, Disney released their first feature-length animated film, Snow White and the Seven Dwarfs. Due to its success, the studio produced and released feature-length films such as Pinocchio (1940), Fantasia (1940), Dumbo (1941), and Bambi (1942).

The iconic Disney Castle exists in two locations only. The first one is the original Castle in the Magic Kingdom, a part of Disney World in Orlando, Florida. The second one is in Tokyo Disney in Tokyo, Japan. The Magic Kingdom is the first Disney theme park, opened in 1971. It was Walt’s greatest and most guarded dream for the brand. Cinderella’s Castle is the center base and central point of the theme park. First, they used it as a business suit for the Disney family and executives. However, after Walt’s death five years from the first theme park’s opening, the Castle stayed unfinished. The Castle was renovated and became a more functional building. Yet, they kept the lavish “dream suite” decorated to reflect the said movie’s aesthetics. The suite is only available to selected guests, usually, contest winners or Make-A-Wish families, especially.

Similarly, the Sleeping Beauty Castle was created and included in Disneyland Park in Anaheim, California, and Hong Kong Disney, China.

Both children and adults continue to love and enjoy Disney movies. Now they extend beyond the classic hand-drawn cartoon animation films to computer animation and live-action films. People form a strong family bond during the special family trips to Disneyland parks and experiences watching the movie.

The Disney Castle symbol is an obvious choice for Disney fans. Due to how long the iconic symbol has been around, there are many ways to get it. Many people decide to get the ’90s-00s simplistic castle outline from many Disney movies’ title card. However, there are a lot of those who choose a more realistic portrayal.

Many designs include the iconic three-circle outline of Mickey’s head, encompassing the Castle or featured in the center. Often, the caste’s surroundings have images from films or several items depicting specific films. For instance, the pumpkin carriage from Cinderella, Aladdin’s genie lamp, or Snow White’s poisoned apple. Usually, the surrounding of the Castle incorporates fireworks. They are indicating the original film title card or the everyday fireworks show in all Disneyland parks. The Disney Castle with Tinkerbell lighting up the uppermost point of the Castle is also a popular choice. In the end, the various characters indicate many various traits. Mickey shows happiness and eternal youth. Many or all Disney characters/princesses indicate power and femininity. Aladdin suggests cunning wit. Lion king’s characters show bravery, pride, and strength. The rose from Beauty and the Beast stands for true love. Winnie the Pooh is a symbol of an idealistic, romantic, childlike whimsy.

Disney castle tattoos are often colorful. These days, the Castle is tattooed in watercolor style. While the Castle indicates a joyful, childlike sense of wonder, it highlights the fantastic and lightheartedness in a watercolor aesthetic. The fanciful flow of the watercolor theme captures the cheerful and sunny childhood days the Disney Castle symbolizes.

If you are a fan of the gorgeous Disney Castle, you should get this kind of tattoo. You can get this tattoo for everything that it represents. But you can also get it only for its look. Everything depends on you, but you should know that this tattoo is truly one of a kind.