Animals always had great importance when it comes to tattoo design. A lot of them are used because of their symbolism and meanings. So, we can say that animal tattoos have a long history as visual symbols. Since ancient times, mankind depicted animals in art, to convey different culturally-rooted meanings.

From some cave paintings 20,000 years ago to the 21st-century comic strips, there are a lot of different ideas that surround and underline these images. One of those animals which have had important meaning and symbolism were the birds. 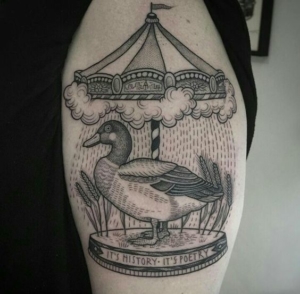 Humanity has always had some special connection to birds. They are the symbol of a lot of human values, and there were even some ground-breaking inventions, such as the airplane, on the structure of their body.

Nature created huge diversity in itself, from man to animals and the winged creatures, birds, which usually stand for emancipation and freedom. The amazing creatures have fascinated the humans with their capacity to flap their wings and flying high in the skies. It is probably this fascination that made bird tattoos a favorite choice among the tattoo lovers in the past and even today.

These tattoo design impressed both men and women that want them to be inked on their bodies. They also interested the designers for a long time ago, and this is the reason why they were unleashing their creativity for bringing forth some innovative ideas for some of the best designs in this genre. These tattoos are not just high in aesthetic value, but they are even considered symbolically significant.

There are various kinds of birds in the world, and they differ in size and physical appearance. This is one of the main reasons why they are broad subjects when it comes to tattooing. One such bird is the duck.

Read below and find something more about the duck tattoo design and its meaning and symbolism in tattoo art.

For a lot of people, ducks are animals that associated them with a lot of childhood television shows or scenic ponds, but the symbolism of the duck goes far behind that. Ducks are resourceful, and they can live on both land and water, and even have the ability to adapt and transition very well, being migratory birds by nature.

They may also escape their enemies through flying, as well as swimming or diving underwater, making them incredibly elusive and hard to catch.

All over the world, some cultures saw the ducks as important animals that represent some important attributes and traits. For example, the Indian culture recognized the ducks as the symbol of the constant cycle of life. There, the ducks appear at the end of the rice harvest, to feast on the leftovers and lay their eggs too: the cycle of bright is in that way continued.

According to the Celtic animal symbolism, the ducks are the symbol of simplicity, honesty, sensitivity, as well as resourcefulness. The Celtic culture even sees the wild birds as being equally beautiful, as well as honest. They are adaptable creatures too, they are sensitive to their environments, and they are graceful on both water and land.

The ducks even have a few meanings which transcend cultural boundaries. Those who are studying and interpreting dreams believe that the duck which shows up in a dream is a good omen. In contrast, for some conservationists, ducks are the symbol of the commitment of people to the environment and the significance of preserving natural habitats for successive generations to enjoy.

In the recent modern culture, ducks became the symbol of childhood, because of the famous cartoon characters Daffy Duck and Donald Duck.

Moreover, the hunting culture also made use of the symbolism of ducks. A lot of hunters employ a ‘duck’ decoy,’ which is a painted wooden duck, to attract some other ducks, knowing that they are fond of company and are also communal animals.

Tattoos or some other images of ducks, both in Western and Eastern art, tend to portray this bird in its realistic fashion. In the East, duck symbolized affection and material fidelity, while in the West, they were hunting trophy and symbol of the wild nature, providing the duck hunters with an opportunity for colorful tattoos, which reflect the plumage of the duck.

Even though there is an enormous variety of the type of ducks and the way in which they may be drawn, there are a lot of common meanings nowadays which cover every end of the spectrum.

Whether you see the duck as a personal animal spirit guide, or a symbol of your own culture, and even the image of your favorite childhood cartoon character, there are a few different meanings inherent in a duck tattoo.

On the one hand, the duck symbolized adaptability, transition, and resourcefulness. Those people that connect with the saying about water off the ducks back see their tattoo design, meaning migration, resilience, and persistence.

Some of the other popular duck tattoo design meanings can range from community, rebirth, elusiveness, and the circle of life, determination, and masculinity.

As the ducks are the symbolic animals in a lot of different cultures in the world, a duck tattoo may be created with a particular cultural style or flair in mind. Using the styles or the colors indicative of Chinese, Celtic or Indian art, may add some other layers of meaning to the tattoo design, demonstrating both cultural heritage and personality traits.

Whether you choose the rubber duck tattoo to represent some time in your childhood or even your child, or you are a hunter, and the duck will be just a picture of your ultimate prize, the vast amount of meanings will make this by far one of the most popular tattoo designs which you may choose.